Operatic's next show will be The Producers 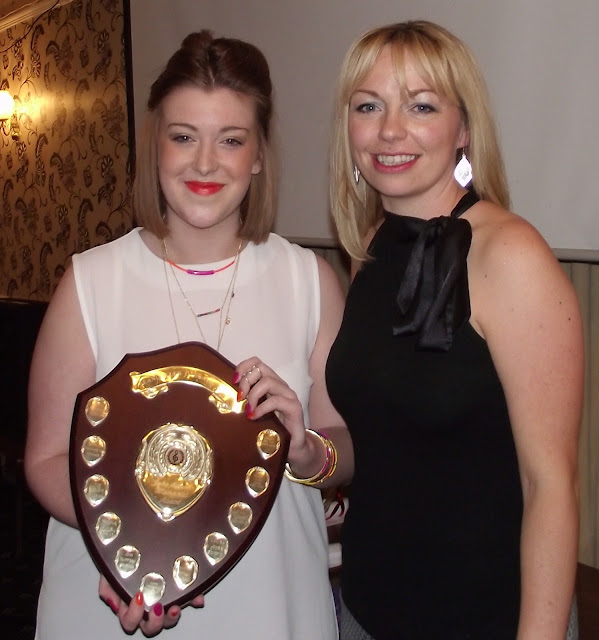 Fresh from its recent success with Sister Act, Llangollen Operatic Society has announced that its 2016 production will be the internationally acclaimed musical The Producers by Mel Brooks.
Originally a film starring Gene Wilder, the show first opened on Broadway in 2001 and has since won a staggering 12 Tony Awards in addition to three Olivier Awards.
It is currently on a UK national tour with the comedian Jason Manford playing the principal role of Leo Bloom and Ross Noble as Franz Liebkind.
The show will be produced by Tracey Rawlinson, assisted by her daughter Alix Rawlinson, who has just graduated in drama and theatre studies from Aberystwyth University.
Elen Mair Roberts will once again take the helm as musical director and society stalwart Nia Pickering will make her debut as artistic director.
Tracey said: “In the same vein as Sister Act, The Producers is quite unlike anything we have staged before.
"It will be a challenge but Elen, Nia and I have every confidence that the cast and crew will rise to the occasion as they always do and put on a unique and unforgettable production that our audiences will absolutely love.
“The show has everything; it’s vibrant, outrageous, risqué and will have you aching with laughter. We really can’t wait."
The production will run from April 12-16 next year, with a matinee performance on Saturday, April 16.
As ever, the group is keen to welcome new members for roles both on stage and off. In particular, they would like to hear from any men who are interested in joining as this show has a significant male cast.
The new season will start with a musical theatre-themed get together on Saturday, September 5 in Llangollen’s RAFA club.
There will be a bar, nibbles, an opportunity to get the vocal chords working with karaoke and for potential or returning members to meet and chat with some of the current membership.
Rehearsals will then start in earnest on Tuesday, September 8, at 7.30pm in the studio off Castle Street.
If you would like to like to get involved or would like more information, contact Tracey on 07875639533/traceyrawlinson@btinternet.com or Nia 07766800272/ nia_heavens@hotmail.com
* The society recently held its annual general meeting during which the winners of its 2015 awards were announced.
The John Evans Memorial Trophy, which is judged by an independent adjudicator and presented to the member who is deemed to have given the best all round performance in the annual production, was awarded to Elen-Haf Taylor for her spectacular performance as Deloris van Cartier in the society's recent production of Sister Act. 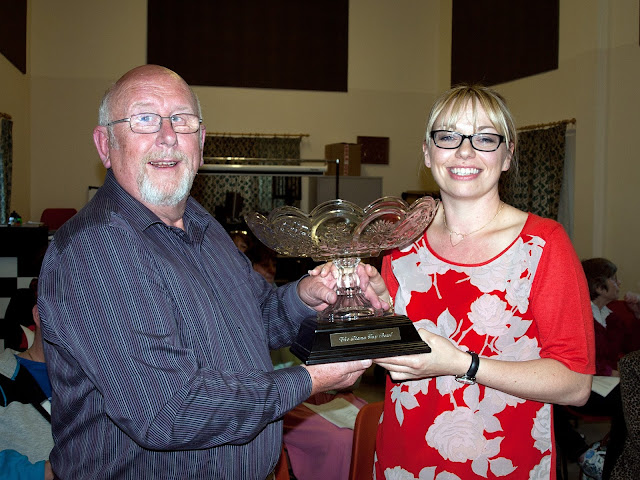 * Paul Gay, left, presents the Diana Gay Rose Bowl to Tracey Rawlinson.
Elen-Haf is leaving the society to pursue a degree course at the Liverpool Institute of Performing Arts.
Recipient of the Diana Gay Rose Bowl, which is presented by Paul Gay in memory of his late wife, who was the society’s wardrobe mistress for a number of years, was Tracey Rawlinson.
This award is voted for by the membership and is presented to the member who is considered to have done the most for the society over the year.
Having not only produced but also directed Sister Act as well as doing so much more, Tracey was the unanimous choice for this award.
Posted by llanblogger at 6:52 AM