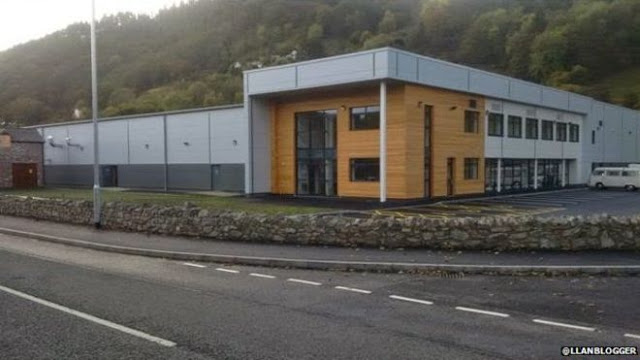 * The Dobson & Crowther factory at Cilmedw.

THE new owners of a Llangollen printworks which recently went into administration say they are hoping to re-start production there “very soon” taking back many of its redundant staff.


Dobson & Crowther, which earlier this year moved into a new factory at Cilmedw,  called in administrators last month after what was described as a “challenging 18 months” for the business and made 55 of the 79-strong workforce redundant.
Llanblogger revealed on Saturday that Telford-based company, Mail Solutions Group, had bought the assets  of the company from administration.


Now, Mail Solutions’ group finance director Phil Reid has given llanblogger more information about what it has planned for Dobson & Crowther.
And his statement contains two pieces of good news for the area – that envelope manufacture could soon be resumed and that members of the previous workforce manning the machines.


Mr Reid said: “We are still formulating plans for the building, and can’t give a definitive response.
“Suffice to say that the previous Dobson & Crowther staff had a fantastic reputation in the marketplace in relation to their manufacturing skill and customer service.


“We are therefore excited about the prospect of re-commencing envelope production activities at Llangollen.
“There are, however, several commercial hurdles to overcome.


“For instance, many of the staff made redundant by the administrator prior to our involvement with the Llangollen site may have found new jobs; suppliers, many of whom suffered bad debts when Dobson & Crowther entered administration, may be unwilling to support a new venture at the site and customers may have moved their trade elsewhere due to the uncertainty caused by the administration process.”
Mr Reid added: “Notwithstanding these issues, we are hopeful that we will indeed re-commence production at Llangollen, and create employment for many of the workers who have lost their livelihoods.


“So far, staff, customers and suppliers have been amazingly supportive, and Mail Solutions Group is looking forward to the possibility of re-starting the machines at Llangollen very soon for the benefit of all stakeholders.”
Llangollen county councillor Stuart Davies said: “I welcome the news from Mail Solutions and will do everything in my power to assist in any way I can to help make this happen.


“My thoughts go out to the workforce in these difficult times and I hope as many as want to can get employment again in the magnificent new factory.
"My heartfelt thanks go out to the company and I wish them well in the new venture."


* Clwyd South AM Ken Skates held extended discussions with administrators Baker Tilly after the redundancies were announced, and secured assurances that details of the workers laid off would be passed on to any buyer.
Mr Skates said: “I am delighted by this very positive news and hugely relieved that the hard-working employees made redundant could soon find new opportunities at the site.
"I’m pleased to have been able to help and look forward to the presses rolling again soon.”

* At first glance it might be interpreted that Dobson & Crowther could be reopening under new management and that jobs will be saved, all just in the nick of time:  See http://llanblogger.blogspot.co.uk/2015/07/deal-done-for-dobson-crowthers-assets.html, the latest headline is Deal done for Dobson & Crowther's assets.


It looked like standard liquidation by Administrators, asset-stripping in order to pay off as many pence in the pound to creditors as possible, but Keep Llangollen Special’s research reveals a much closer symbiosis between Dobson & Crowther and Mail Solutions Group’s operations than it appears at first glance.
In fact, the Telford company’s product range would be increased, introducing more stability and the chance to expand.
Can we actually believe it this time after all the propaganda, broken promises and bogus claims that the fundamental business is “sound”? It’s easy to by cynical, but at least one victim of the job losses had been interviewed by telephone by the new company.
KLS will, as always, keep a watch and ensure everyone’s kept informed. Meanwhile, the moral of this and other recent stories is to ram it home to our elected representatives that they put themselves forward to represent us, not themselves.
Our hopes and wishes are, as always, with the former and prospective employees, and KLS would welcome the opportunity to meet with Phil Reid of Mail Solutions Group to foster good community relations with the company from the very outset.
Martin Crumpton
Chair ΞKeep Llangollen SpecialΞ

Posted by llanblogger at 2:04 PM