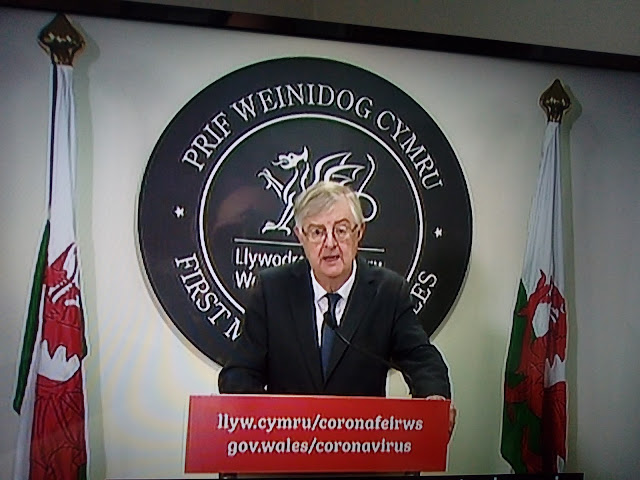 The BBC is reporting this afternoon that people from parts of England, Scotland and Northern Ireland that have high rates of coronavirus will be banned from travelling to Wales from Friday.

Wales' First Minister Mark Drakeford said the move was needed "to prevent the spread of infection within Wales" and elsewhere in the UK.

It follows a row with the prime minister over whether parts of England should have travel restrictions.

Mr Drakeford had written twice in recent weeks to Boris Johnson asking for travel to be restricted in and out of areas with high levels of transmission in England.

The UK government has refused to do so, instead asking people in the worst affected areas to avoid non-essential travel.

Mr Drakeford said he had had no "formal response" from the prime minister.

He said: "Evidence from public health professionals suggests coronavirus is moving from east to west across the UK and across Wales.

"As a general rule, it is concentrating in urban areas and then spreading to more sparsely populated areas as a result of people travelling."

The rules will come into force on Friday at 18:00 BST.

Local Member of the Senedd has welcomed action by the Welsh Government to stop people from areas with high coronavirus infection rates elsewhere in the UK from travelling to Wales.

Clwyd South MS Ken Skates said: “I have received a number of emails and calls from constituents who are rightly frustrated that while they are continuing to make sacrifices to keep Wales safe people from parts of England with much higher infection rates have been able to travel over the border into North Wales.

“People in Llangollen have reported their concerns to me about this since the temporary restrictions were introduced in Denbighshire.

"The First Minister has repeatedly called on Prime Minister Boris Johnson to follow Wales’ lead by introducing urgent travel restrictions in English areas with high infection rates – which was echoed this week by the Plaid Cymru Police and Crime Commissioner for North Wales. Sadly, the Prime Minister has repeatedly refused to take action despite increasing calls from neighbouring English councils for similar measures.

“This could have been dealt with much earlier by the UK Government taking responsibility rather than delaying matters by forcing the Welsh Government to undertake complex legal discussions. I am glad the First Minister has continued to prioritise the safety of the people of Wales and I’m sure many others will welcome this decisive action.”

Posted by llanblogger at 3:49 PM