St Collen's reveals its plans for the church's future 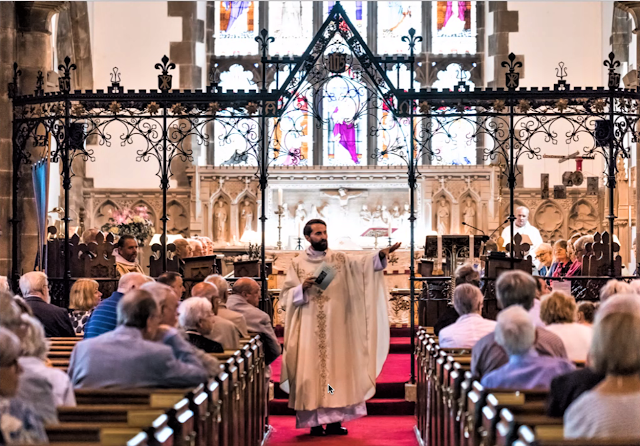 * A raised platform for worship and performance would be built at the front of
the nave after four rows of pews are removed.

Urgent action is needed to preserve St Collen’s Church for the future use of the people of Llangollen.

That was the strong message from priest-in-charge Father Lee Taylor as he showcased plans to upgrade the historic building with the aim of making it a hub for a wider range of religious and social use.

* Repositioning of the font to a more practical location

* Replacing the traditional pipe organ with a digital version

Around 20 people interested in the future of St Collen’s were invited by Father Lee to join the Zoom meeting, including the architect in charge of the project Duncan Sanderson and members of the church’s task force group dealing with the project.

Father Lee started by drawing a comparison between Coronation Street – his favourite TV soap – and the Church generally.

“Throughout its 60 years’ history Coronation Street has never stopped changing because its producers realised that if it didn’t keep evolving it would die,” he said.

“The same can be said of the Church and the time has come for St Collen’s to change, to adapt our building so that we can better serve our community in a new, exciting and challenging ways.”

He said the call to change was more urgent than it had ever been, in the face of dwindling Sunday morning congregations across the whole of the Church in Wales, the lack of younger people joining and fewer priests being available to serve communities.

And he stressed: “The fact is that we must adapt or die. In 10 or 20 years if we don’t do something there will be no parish church. It will close.” 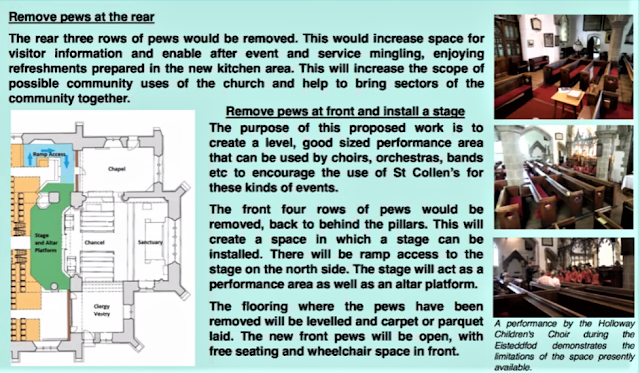 * An explanation of part of the Community Vision plan.

In a bid to make St Collen’s “more inclusive and accessible” the church has come up with the Community Vision blueprint which includes “both spiritual and social” elements.

Central to the plan would be the raised platform stage envisaged for the front of the church to make it easier for the congregation to see and hear what is happening. This could be used for worship and performance events.

This, explained Father Lee, would mean the removal of the front four rows of pews back behind the pillars, with ramp access to the stage on the north side.

He showed pictures from previous churches where he had worked in the south of England which had similar raised areas.

In Southwark Cathedral, for instance, a high platform had enables it to host scores of performances and concerts alongside its traditional services.

To enable St Collen’s to host more social events where refreshments are served the plan proposes a folding kitchen is installed in the north west corner of the church where the choir vestry and font currently are.

The font is in this position because it was where the original church entrance was sited but Father Lee said it would make sense to move it for practical reasons.

The kitchen – constructed to look like a piece of furniture when folded – would, he said, allow St Collen’s to offer food and drinks not necessarily in the context of worship, such as candle-lit tours of the church, storytelling and bereavement cafes and exhibitions.

Describing the ornate roof with its medieval beams and carvings as the St Collen’s "crowning glory", Father Lee said the idea was to install LED lighting to enhance these features.

The new lighting would be flexible, capable of complementing worship, concerts and other events.

Another aspect of the plan is for the south porch entrance and west doors under the tower to have glass doors fitted inside to both mitigate drafts and enable the original wooden doors to be left open when the church is in use, creating a visual link to the inside of the church to draw in passing pedestrians.

Father Lee said he knew the heavy oak doors at the south porch made some visitors hesitant about entering the church.

The rear three rows of pews would also be removed to increase space for visitor information and enable after-event and service mingling.

Other proposals include a new small chapel for private meditation and worship where the current vestry is, the replacement of the pipe organ with a much more compact digital instrument and better wheelchair access.

Architect Duncan Sanderson assured that none of the interventions would disturb the numerous memorials inside the church.

Father Lee said: “All the alterations and changes will be done with the utmost care and sensitivity to the historic building.”

He added that there was no time-frame for when these changes would happen.

“The plans are still being discussed and the Diocesan Advisory Committee must approve them before we make bids for funding. I think it’s a very exciting project,” he said.

People who attended the Zoom meeting gave a general thumbs-up to the proposals and Father Lee said later: “We are still in discussions about the costs.”