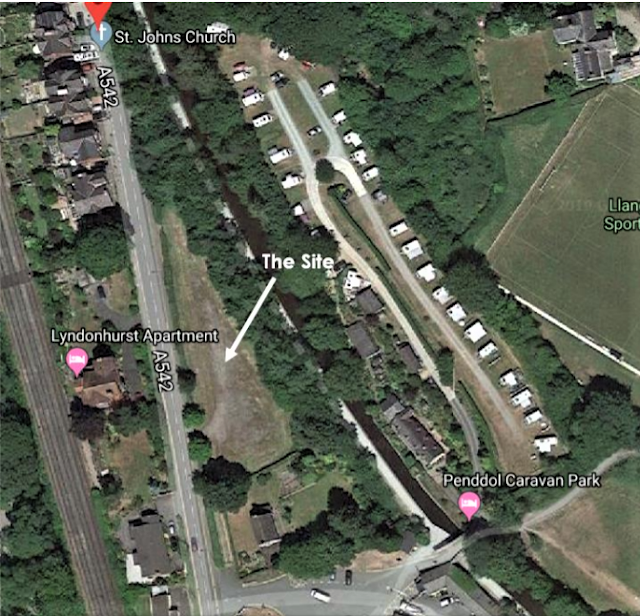 * An aerial view of the proposed development site off Abbey Road.

Llangollen International Musical Eisteddfod has withdrawn its planning application for a small residential development on land it owns off Abbey Road.

In August llanblogger reported that the eisteddfod was seeking permission from Denbighshire to build seven houses on the overspill car park close to its main site in a bid to raise cash for the festival.

A decision by county planners was pending.

But in a statement issued this afternoon the eisteddfod says the plan has now been withdrawn.

The statement says: "In July, the Trustees of Llangollen International Musical Eisteddfod (LIME) submitted a planning application to Denbighshire Council for a modest residential development on a parcel of land adjoining Abbey Road, Llangollen.

"The application was part of a pre-COVID scheme to raise much needed funds for the Eisteddfod and enable organisers to plan for the future with confidence.

"However, at a Board meeting last week, LIME Trustees voted to withdraw the planning application at this time and instead retain the piece of land as an asset for the organisation.

"In April, following the postponement of this year’s Llangollen International Eisteddfod due to COVID-19, Welsh Government recognised it as a Welsh flagship cultural event and in doing so pledged financial support to help with business continuity through 2020."

Chair of the Trustees for the International Eisteddfod, Dr Rhys Davies said: “The support from Welsh Government helped cover losses this year arising from the coronavirus pandemic, however further funds are still needed to maintain the event in the future.

"In our recent discussions, the Trustees recognised that the continuing situation of COVID-19 and the unpredictable future meant that we need to adapt and review all our fundraising options. The Trustees also felt that, at present, retaining the land as an asset was the most sensible way forward.”

Dr Davies continued: “LIME’s commitment to being a good neighbour in Abbey Road was core to and continues to be at the heart of our deliberations.

"Whilst we felt the scheme had been designed to respect and compliment the area, and to take account of the sensitivity of the site being within the World Heritage Site and Area of Outstanding Natural Beauty, we also listened to the concerns raised by our neighbours and community who have made our International Eisteddfod the much-loved event it is today.”

If it had gone ahead and been approved the proposed development of three-bedroom homes would have occupied a small triangular paddock off the A542 which is currently listed as brownfield for development purposes.

A design statement issued by the applicant’s agents, Fisher German of Chester, admitted the proposed scheme was outside the development boundary and therefore contrary to Denbighshire’s current Local Development Plan (LDP).
Posted by llanblogger at 1:45 PM