Old Vicarage residents use lockdown to tell their stories 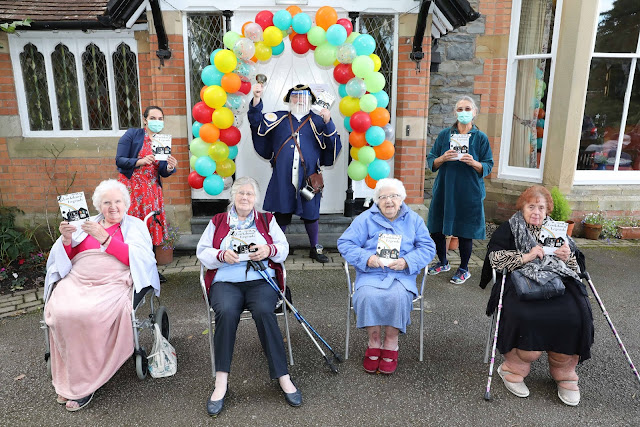 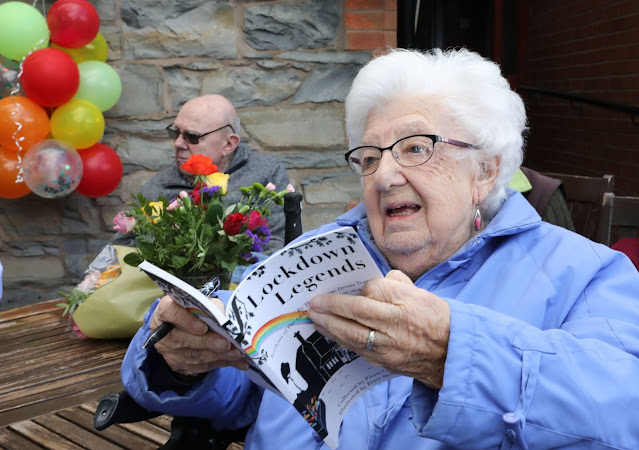 * Ena Strange, 99 ,enjoying reading a copy of the book. 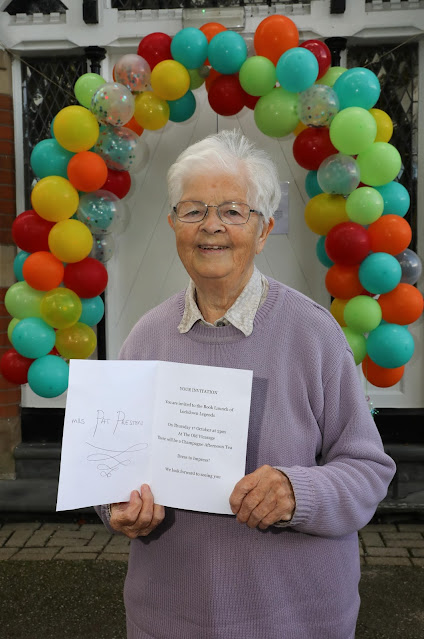 * Pat Preston, 89, with her invitation to the launch party. 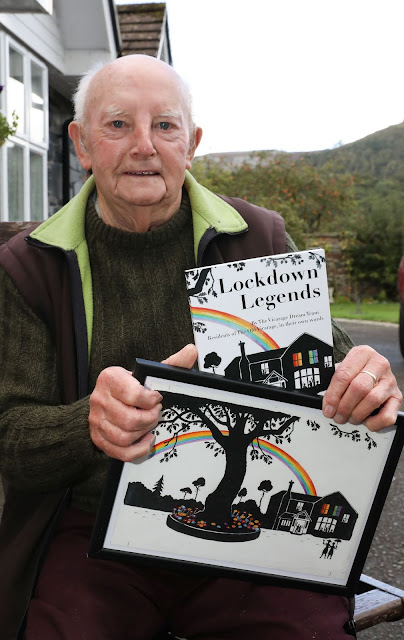 * Bill Gosson, 90, with the book and the book illustration.

A Llangollen care home has created a lasting legacy from the coronavirus lockdown by drawing together the life stories of its residents in a new book.

The Old Vicarage hired professional storyteller Fiona Collins as a care worker and activities assistant at the onset of the pandemic to help keep residents’ spirits up when they were missing their families.

During the early months of lockdown, Fiona encouraged the residents to share their life-stories with each other in the garden and unearthed a treasure trove of post-war adventures – some of which raised eyebrows!

Now those experiences – which include a resident learning to drive at the age of nine in a hearse from her grandfather’s funeral business and another resident hitchhiking her way around Europe after the war – will become a part of history in a new book called Lockdown Legends.

The book, which has been professionally illustrated by renowned local artist and illustrator Peter Stevenson and includes a foreword from Heléna Herklots CBE, Older People’s Commissioner for Wales, has been unveiled to the world with a little help from Llangollen Town Crier Austin Cheminais.

It includes the stories of 17 residents – two of whom have sadly passed away since the book has been published – all of which were shared during lockdown with additional detail provided by family members.

The home now hopes to be able to attract some celebrity endorsement to give the book the attention it deserves and is inviting reviews from the world of stage and screen.

“We’ve harassed royalty already and I’ve written to Prince Charles, who is the Patron of Age Cymru, and Prince William,” said Bethan Mascarenhas, who owns the home alongside her brother Richard.

“We’d love for some authors to review it, may be Michael Morpurgo or even a legend of the likes of Sir David Attenborough!”

One of those to contribute was Ena Strange, 99, who grew up in Liverpool and said the experience of telling life stories had really helped during lockdown.

“We were fortunate, you might say, to be here as we still had people to talk to with the other residents and staff. For someone living alone it must’ve been terrible. I felt lucky,” she said.

“It was just everybody talking and sharing what had happened in the past. I didn’t think I had an exciting life, I thought I had a dull life.

“I worked in a gown shop when I was younger. I actually wanted to work in an office but my mother said I’d never sit still and she wouldn’t let me. I wanted to join a tennis club and my father wouldn’t let me. But when the war came I was called up and went into the National Fire Service and was stationed on Salford Docks. That was an education! Eventually, I got promoted to assistant group officer and became deputy when the group officer was off.  I really enjoyed it.”

Fellow resident and retired teacher Jill Lidgett, 87, originally from London, said: “It’s been lovely, talking about things that we wouldn’t normally have raised. It was great to hear everybody’s secrets! It’s a lovely home and everyone’s so friendly. Some of the stories were surprising.”

“I was born and bred in Llangollen. My grandfather had a business as an undertaker and I learned to drive when I was nine – a hearse! It was brilliant,” said the grandmother-of-six.

“It’s very important to remember our backgrounds and remember what we have achieved and not be ashamed about where we have come from. I’ve always talked a lot and have told a lot of stories. I suppose it has been my job as a teacher. I think it’s very important for people to listen to others.”

“Lockdown was a deeply worrying time for care homes, particularly for residents and their families, and I am so grateful to The Old Vicarage for transforming the experience in such a positive and poignant way. The experience of opening up and sharing life stories has brought much comfort and joy to these residents.

“These stories are now part of history and will continue to inspire generations for many years to come. It reminds us all how important it is to listen and learn from the past.”

For Bethan, who also manages the home, the story-telling was a way of encouraging the residents to keep socialising and engaging despite being unable to have family visits.

“Our idea was to keep everybody socially involved because our biggest worry was that people would become isolated and as soon as somebody becomes isolated they become disengaged and we see less mobility and depression setting in,” she said.

“It was all about keeping a hive of activity in the home. Fiona would sit with them and they would just talk about their life stories. We found the stories were living around the home for a while and it was the subject of gossip!

“One of our ladies used to go hitchhiking around Europe after the war when she was just 17. Another lady was this incredible consultant who worked for Coca Cola. We’ve been shocked and amazed with the stories they’ve told.

“Fiona and I discussed it and I thought it needed to be put into a book to share with their families and it all spiralled from there. It just made sense. Lockdown was an extraordinary time to live through and it’s something to remind us of this time in an incredibly positive way.

“It’s also people’s legacies. Two people have passed away since the book was created. It’s so touching to be able to sit and read and remember these individuals. It’s a lovely resource for the families.”

The book has been printed by Inky Little Fingers Ltd and already the home has had family members, GPs and other supporters requesting copies.

Storyteller Fiona, from Carrog, said the book was a lasting symbol for the residents’ fortitude during the pandemic.

“We tried to capture a sense of everybody’s voice on the page,” she said.

“It really brought it home to me that you should never make assumptions about people, particularly if you meet people later on in their lives. All the amazing things they have done with their lives you wouldn’t know if you didn’t take the chance to get to know them and talk to them. It has been a real honour to hear their stories and find out about their adventures.

“It wasn’t so easy back then but despite that they have all really flourished and I’m really proud of them all.”

Feedback on the project has been so positive that the home is now considering other opportunities to share the remarkable tales with other audiences.

“We would like to go into primary schools when it’s safe to do so to run our own story-telling sessions with local children and pass on that knowledge,” explained Bethan.

“We bought a tepee which we use as a decontamination area for staff at the moment and in the future we will use that as a story-telling venue.”

Posted by llanblogger at 9:50 AM