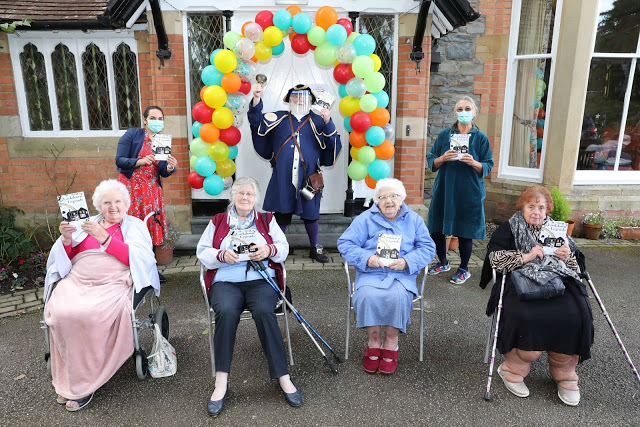 When you visit a care home for the elderly and see the residents sitting comfortably in their armchairs it’s easy to get the impression, simply because they’re now getting on a bit, that they are just normal people who have lived pretty unexciting lives.

But if you take the trouble to stop and chat with them you’ll quickly discover that quite a few of them have led lives and had experiences that are far from mundane.

This is exactly the case with The Old Vicarage in Llangollen.

And the talks professional storyteller Fiona Collins had with a group of residents were so downright fascinating that they just had to be brought together in a book.

Fiona was commissioned by home owner Bethan Mascarenhas and took the opportunity of lockdown, which meant visitors weren’t allowed in, to don her PPE and speak at length to them, recording their recollections for the 132-page Lockdown Legends.

Apart from their stories it is lavishly illustrated by Peter Stevenson and contains a host of their family photos.

One of the contributions comes from Amy Lawton, who was a fiery red-headed Post Office telephonist at the time of the Second World War.

Poignantly, she recalls putting through calls to houses that sometimes weren’t there anymore because they’d been destroyed by bombing.

After the war she and her husband of eventually 65 years quite fancied starting a new life in Canada but their dream was dashed when his dad refused to allow him to go.

However, the couple made up for it later in life when they went globe-trotting on frequent foreign holidays. They also lived in many place during their life together but eventually made their home in Llangollen.

Sad to record that Amy died peacefully at the Old Vic in August at the grand old age of 99.

Then there’s Bill Gosson who remembers his early years growing up on Merseyside – and being bombed by the Luftwaffe almost every night for six or seven months during the war.

His family home was eventually destroyed by a bomb which fell nearby and killed a number of his neighbours. Bill had to be dug out of rubble by a rescue party and was evacuated to Llangollen.

Sadly, there was more tragedy in store for him when a fellow young evacuee drowned on his first day in the area after falling into the river.

Later in life Bill lived in Scotland where he did up his own house and, along with his wife, became part of a Scottish country dancing team.

Ena Strange was born in Liverpool and brought up in Manchester. She recalled being a sickly child whose family doctor advised her mother to take her to north Wales to “run with the sheep”.

They took a cottage on Sun Bank, just outside Llangollen, which she reckons saved her life.

It’s a good thing she became strong because as a teenager during the war she served as an officer in the National Fire Service dealing with the dreadful aftermath of bombing raids on Salford Docks.

In December Ena is due to celebrate her 100th birthday.

In the book we also learn the story of 87-year-old Iola Roberts, who was born in Acrefair and became a well-known mainstay of many local organisations including the eisteddfod and the Twenty Club dramatic group.

One of her outstanding early memories is how she began driving at the tender age of nine.

“My grandfather had the undertaker and building business. The men in the business taught me to drive in the yard – in the hearse.”

Jill Lidgit, 85, was born in London and, unusually for those days just, she and a friend hitch-hiked across a Europe that was still recovering from the war.

They ended up in Italy where she recalls seeing Leonardo’s The Last Supper at a gallery in Milan, being lucky enough to get tickets to enjoy a concert by the great soprano Maria Callas, climbing Vesuvius  and joining the crowds in St Peter’s Square to hear the Pope deliver his Easter message.

Many other tales featured in this delightful book are equally enthralling.

* Lockdown Legends, priced at £9.99, is available from Courtyard Books who are currently taking pre-orders for a print run with all proceeds going to the residents’ fund at the Old Vic..

Orders and payments must be made before 2pm on Monday October 19.

The shop will be open from 10am-2pm, or you can contact them on the Courtyard Books Llangollen Facebook page, or on courtyardbooksllangollen@gmail.com

They are able to post worldwide for an extra postage fee.