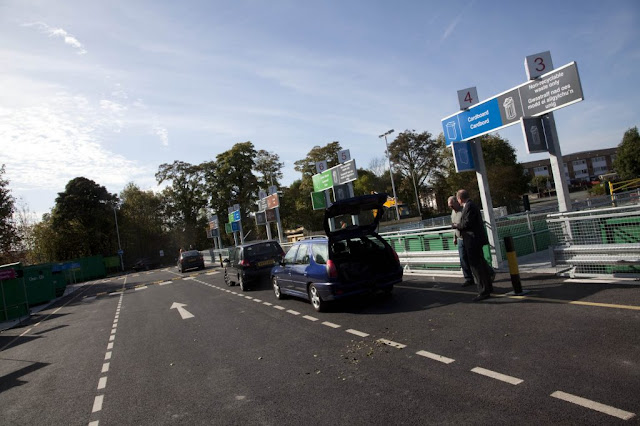 Light has been shed on why Wrexham is unable to assist Llangollen people with their lack of waste recycling facilities.

With the nearest facility being at Ruthin, but like the rest of those in Denbighshire restricted to an appointment-only system to observe social distancing, there have been growing calls for a more localised way for people to dispose of their rubbish.

On llanblogger former Llangollen county councillor has backed calls for the re-introduction of  Saturday morning recycling at the Pavilion car park which was stopped when the lockdown began.

This idea has been gathering support on social media.

There have also been suggestions that Llangollen residents should be able to use the Plas Madoc  recycling facility in neighbouring Wrexham.

But llanblogger has been shown a copy of the reply Ken Skates received from a Wrexham Council official last week when he asked them if this would be possible.

The email, from a senior environment department official and dated last Thursday, says: "I refer to your e-mail regarding the above addressed to the Chief Executive which has been passed to me to provide a response.

"This is an already massively oversubscribed service to which our residents are entitled and indirectly support through their Council Tax and as such we need to restrict it to them.

"We have had people from many, many miles away trying to use these sites and we are unable to take on the waste responsibility of other local authorities so have put the controls in place to protect our interests.

"To allow anybody to utilise the HWRC (Household Waste Recycling) sites in Wrexham would cause even more congestion than now and would put an unfair weighting onto Wrexham County Borough Council. To open the HRWC sites was a major political and logistical exercise carried out solely for the benefit of the residents of the Borough.

"Denbighshire are currently working on the final details for opening their HRWC sites following the same guidelines as we did and will be putting similar control measures in place, so the residents of Llangollen will need to utilise the HWRC's within their own County when the opportunity presents itself."
Posted by llanblogger at 10:14 AM