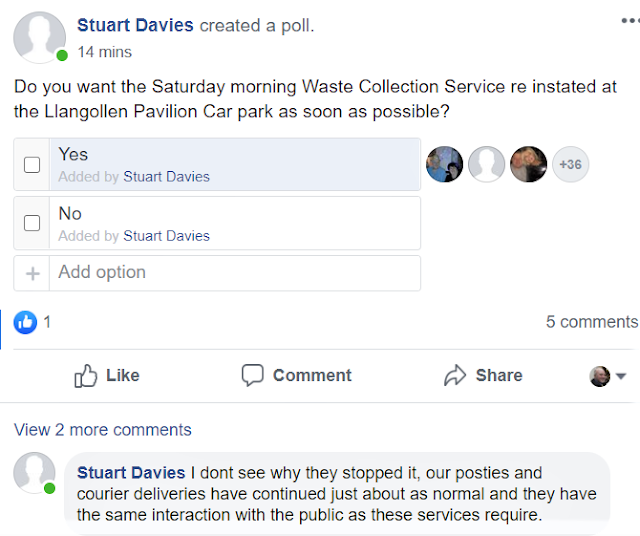 A former Llangollen county councillor has started an online petition asking local people if they want to see the swift return of the Saturday morning waste recycling service on the Pavilion car park.

The service, in which a small fleet of county council refuse vehicles parked up for a few hours to collect waste brought in by residents, was suspended early in the lockdown.

Current Llangollen county councillor Graham Timms said recently that he and fellow local representative Melvyn Mile were lobbying hard for the return of the service but were experiencing difficulties as the county had said it could not yet ensure it can be carried out observing the required social distancing.

Without the Pavilion service Llangollen people must drive over to the Ruthin recycling site, which is operating an appointments only system, to deposit their household waste.

But now ex-councillor Stuart Davies has posted a poll on Facebook which asks local people to say yes or no to whether they want to see the service resumed as soon as possible.

The online test of public opinion was posted only this morning on the Llangollen & District Noticeboard page but more than 100 people have already voted in favour of a return of the service.

Mr Davies said: "I know our two county councillors are lobbying for the return of the Saturday morning service and I thought a show of public support like this might strengthen their argument."

And Clwyd South Senedd Member Ken Skates is looking into whether an agreement exists between Denbighshire and Wrexham for local people to use the Plas Madoc tip.

Since Llangollen's own recycling facility on the A539 was closed in 2007 people from this area have been using either the Wrexham site, or the "pop-up" Saturday morning waste service on the Pavilion car park.

Both facilities closed when the coronavirus lockdown began about 10 weeks ago but the Plas Madoc facility opened again last week.

Mr Skates asked Wrexham last week if Plas Madoc could be used by local people but, as llanblogger reported earlier today, he was told this was being reserved for Wrexham residents.

Now it has been suggested that some form of agreement was reached between Denbighshire and Wrexham for Llangollen's use of Plas Madoc 13 years ago.

And Mr Skates said today he was seeking clarification from the two councils about whether this is the case.

Llangollen county councillor Graham Timms is also looking into the agreement claim, which was made by Stuart Davies.
Posted by llanblogger at 12:00 PM