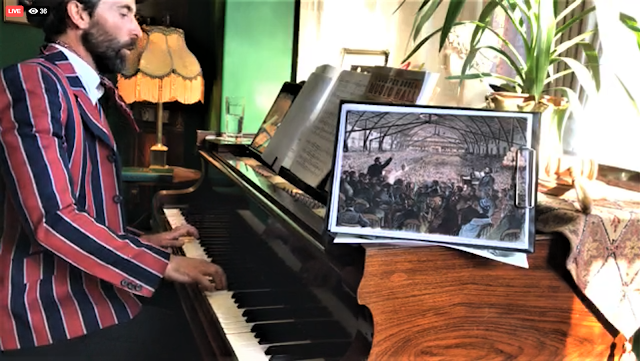 * Father Lee at the vicarage piano for the hymns and music hall songs session.

Llangollen vicar Father Lee Taylor held the first in a series of musical sessions streamed live on Facebook yesterday evening in which he mixed hymns with numbers from the days of music hall, of which he is a major fan.

A number of people contacted him in advance to sponsor both types of song, with the money going towards church funds.

Father Lee explained that finances for the four local churches he runs,including St Collen's, had been hard hit by the lockdown which means that congregations are unable to attend.

This had meant, he said, that a total of 21 weddings had been cancelled so far and he gave shout-outs to a number of couples affected.

* A raffle staged by Cat Meade, co-ordinator of the Lllangollen Coronaviris Group, on Saturday evening raised £635 for facilities for the children soon to return to Ysgol Bryn Collen.

Posted by llanblogger at 7:09 AM