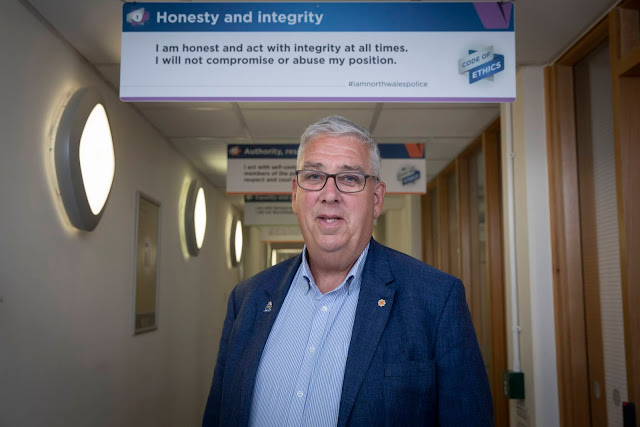 A police boss has spoken out to condemn the brutal killing of George Floyd which has sparked protests across the United States.

According to North Wales Police and Crime Commissioner Arfon Jones (pictured), the tragedy has besmirched the name of police officers all over the world.

Mr Floyd was an unarmed black man who died after a Minneapolis police officer, Derek Chauvin, was filmed kneeling on his neck for more than eight minutes as he told them: "I can't breathe".

The  case has reignited deep-seated anger over police killings of black Americans and racism.

It follows the high-profile cases of Michael Brown in Ferguson, Eric Garner in New York and others that have driven the Black Lives Matter movement.

Commissioner Jones, who served as a police officer, said: “I utterly condemn the violence that let to the death of George Floyd.

“I was sickened when I saw the footage for the first time. I thought that kneeling and putting all his weight on George Floyd’s neck was over the top, brutal and totally unnecessary. I was shocked when I saw them using so much force.

“There were three police officers there are the time and Mr Floyd did not appear to be resisting.

“As a former police officer, I felt ashamed. What happened in Minneapolis have given a bad name to the police service right across the world.

“Donald Trump’s response has been equally reprehensible. He is using this tragedy for political purposes to appeal to his White supremacist base.

“He is deliberately inflaming an already volatile situation and that is unforgivable.”

The Association of Police and Crime Commissioners, of which Mr Jones is a member, also released a statement saying they were appalled by what happened.

They said: “Alongside our communities, we are  saddened and appalled by the footage that has emerged from the US over recent days of the death of George Floyd at the hands of US police officers.

“We express our heartfelt sympathies to the family of George Floyd and to all the communities affected by these events, and we acknowledge the current strength of feeling and the impact that incidents of this nature have on communities around the world.

“In this country, we are proud of the ‘policing by consent’ model on which our forces operate and the work that our police officers and staff undertake day in, day out to keep our communities safe.

“We also have a clear and accountable governance system in place, with directly elected Police and Crime Commissioners representing their local communities and holding their chief constables to account on behalf of their communities for policing in their area.

“We are committed to working with our communities and Chief Constables to ensure that the principle of ‘the police are the public and the public are the police’ is worked towards and achieved, and that we deliver against the important commitments set out within the NPCC Equality, Diversity and Inclusion Strategy."
Posted by llanblogger at 8:34 AM