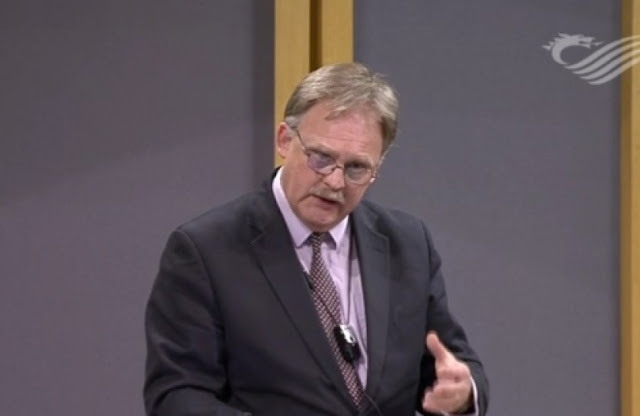 North Wales Senedd Member Mark Isherwood (pictured) has claimed that the "fragile" economy has been damaged by the Welsh Government's delays in re-opening it after the coronovirus lockdown.

He made the comments when closing yesterday’s Welsh Conservative COVID-19 Economy debate in the Welsh Parliament.

The opposition party said the pandemic had been both a public health and an economic emergency and called on the Welsh Government to establish a recovery fund to provide targeted economic support for communities most adversely affected by the pandemic.

Speaking via Zoom from his home Mr Isherwood said: “The Welsh Government’s delay in re-opening the economy has been damaging to the fragile Welsh economy.

“Take passenger transport. Through the Confederation of Passenger Transport,  the industry presented a proposal to the Welsh Government on 15th May which would enable operators to ramp up bus services, with full costings. They have still not received a considered official response.

“Wales is now the only country in the United Kingdom that has not agreed funding for transport operators to begin to ramp up services to cover costs for additional services.

“Take our vital bed and breakfast sector. In England and Scotland, grants are available to B&B operators who did not qualify for any other COVID-19 grant support schemes. In Wales, legitimate businesses have been denied access to equivalent grants.

“Take our crucial Housing Market.  The Welsh Government has failed to open the housing market in Wales alongside the rest of the UK. Within Wales, viewings can only take place in vacant properties and house moves are only allowed where a sale has been agreed but not yet completed.

“Within England, people are allowed to sensibly view properties that are occupied, provided that initial viewings are done online, and that physical viewings only take place with serious buyers and are done by appointment only."

Mr Isherwood added: “Take Holiday let businesses. The Welsh Government has announced that self-catering businesses could reopen on 13 July as long as they adhere to the government guidelines and the Economy Minister, Ken Skates, told North Wales media that comprehensive guidance has been put in place for the tourism and hospitality sector to ensure that the sector can be restarted in a safe way.

“However, self-catering businesses are telling me they have just spoken to their council and that it doesn't have the guidance.

“Take our Town Centres. The Centre for Towns found that Wales is the worst performing area of the UK with regards to its economic well-being, and that specific communities, including ex-industrial towns in parts of Wales, will need an effective support mechanism at a local level to support businesses plan their recovery strategies.”
Posted by llanblogger at 6:53 AM