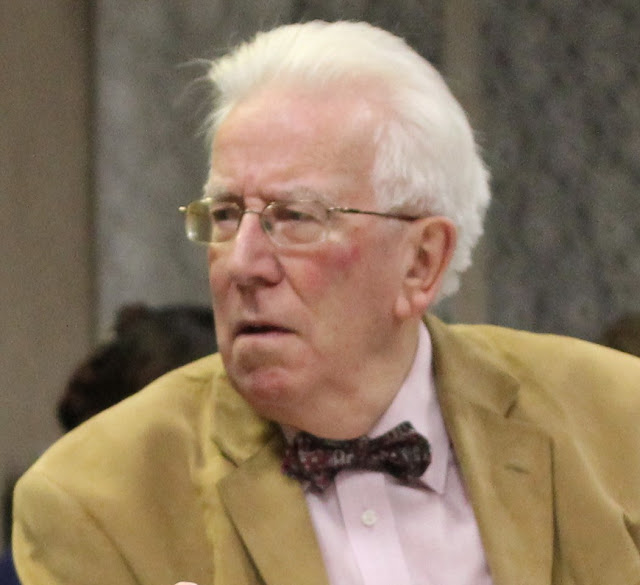 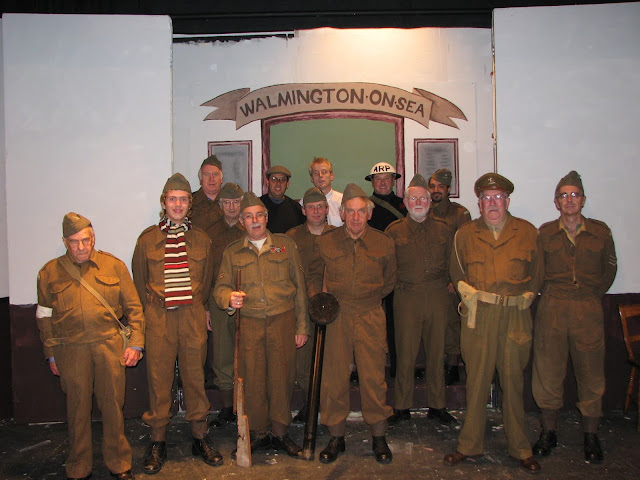 * Mike Law (second from right) is one of his most memorable roles, as Captain Mainwaring in Dad's Army. Both pictures courtesy of Malcolm Potter.

Tributes have been paid to one of Llangollen’s best-known figures from the worlds of amateur dramatics and voluntary work who has died at the age of 80.

For many years Mike Law was an active member of the Twenty (XX) Club, not only appearing in many of its most memorable stage productions but also helping out behind the scenes.

He was a leading member and past president of Llangollen Rotary Club and also an enthusiastic volunteer with the International Eisteddfod.

Nearly a decade ago he founded and remained chair of Llangollen Cancer Support Group.

Mr Law died at his home in the town last week leaving a wife, two sons and two grand-daughters.

Born in Derby, he went on from a local school to study at Liverpool University following which he worked as a teacher in the city and later became a lecturer in English and drama at the I.M Marsh College of Education.

After joining HM Inspectorate of Education he was transferred to its Wrexham office which is when he moved with his family to Wales.

He had met his wife Enid, who was originally from Bangor, at an education conference in Southport when they were both teaching. They were married in 1967.

Both of their sons trained as journalists, Bryn going on to become a reporter with Sky Sport and now  a freelance sports commentator living with his family in Leeds. His brother Tom, who once worked for the Wrexham Leader, is a freelance copywriter based in Cardiff.

The Laws’ two grand-daughters are Megan, who is at Durham University, and Millie, who attends a sixth-form college in Leeds.

Despite taking early retirement from the education inspectorate Mr Law was persuaded to return to education by undertaking lecturing stints at NEWI, the forerunner of Wrexham’s Glyndwr University, and eventually become head of the college’s education department.

He retired, this time permanently, 20 years ago although remained extremely active in a number of spheres locally.

He took prominent roles in the Twenty Club’s most successful productions of the past decade or so, including playing Captain Mainwaring in Dad’s Army.

He twice served as president of Llangollen Rotary Club and was assistant governor of the local Rotary district.

A long-standing supporter of the International Eisteddfod, he served at various times on its town events and outside stages committees. His long service to the festival was acknowledged when he was appointed as a life member quite recently.

Mr Law was also a poet and had a book of his work published.

One of his later achievements was founding the Llangollen Cancer Support Group, which continues to do much to support those with prostate cancer.

His wife Enid said: “He did so much with many local organisations that I think he will be missed very much.”

Paying tribute to him, Ian Parry, a fellow member of the Cancer Support Group, said: “Mike founded the group nearly 10 years ago and remained as chair all that time until illness forced him to step down last year.

“He made it clear that the group existed for all men with prostate problems not just cancer. All those who attend or have attended meetings of the group are grateful for the support and friendship it provides which would not have been the case if Mike had not had the foresight to establish the group all those years ago.

“There were about 10 members when the group was first established and now the email list has grown to over 40 names.

“It is not just Llangollen men who attend but there are members from Wrexham, Oswestry, Bala and elsewhere.

“Mike was able to get all of the urology consultants from Wrexham Maelor Hospital at some time to come to talk to the group about current and new treatments for prostate conditions.

“He was keen to promote and publicise the group and produced information leaflets and business cards and pens which were issued at various awareness events he organised and at local surgeries and health centres.

“He will be sadly missed and the condolences of the group are extended to his wife Enid.”

Sian Glynne-Jones, chair of Twenty Club, said: “Mike has been a member of the club since 1985. He has been very active member up until the last year.  Since then, he has continued to support us by coming along to our performances and helping when he could.

“On stage he has played many roles, including the mammoth role of Captain Mainwaring in Dad’s Army and Love on the Dole, where he played man and wife alongside Enid.

“He has also directed many plays, and been the Assistant Director or Producer to support and assist other directors and novice directors. Some of those plays include Jane Eyre, A Child’s Christmas in Wales, Night Must Fall and Murder on the Nile.

“His dedication to the club also means that when Mike did not have a key role directing or on stage, he was happy to do the less prominent, but still essential, roles of props, backstage or front of house.

“In addition to his stage work, he has been heavily involved with the running of the club.  He has been both a member of the Committee and the Chair of the Selection Committee for many years.  He was instrumental in the club's staging of the unknown play Hannay Stands Fast by David Edgar (who also recently passed away), which was a tremendous success. He was ambitious for the club and believed we should stage a range of plays, from the very popular to the more challenging.

“Mike has also organised many social nights, including the Poem and Pint evenings. He also wrote his own sketches and plays, including a Murder Mystery performed on the Llangollen Railway.

“He had strong belief that the XX Club should help to grow other talent within the group and locally.  This came across both within the XX Club and other groups he was involved with.  He was always very supportive of the club and its people.

“He has also been very supportive of me as a Chair of the club and as a business in town and I thank him for that.

“He leaves us with many memories, including his ability to ad lib on stage, meaning that anyone acting a scene with him had to be on their toes and not necessarily expect to receive the precise cues!

“It has been sad seeing him become more fragile over the last few years as he is yet another one of our ‘old hands’ that we have lost within the last couple of years.

“Thank you Mike for your continued support and your belief in our society.  We hope that those who you have helped to grow will have many successful years and will go on to help others to grow.”

Gethin Davies, on behalf of Llangollen Rotary Club, said: “The sudden and unexpected passing of Mike Law has been a great shock to all who knew him, but particularly to the members of the Rotary Club of Llangollen.

“Mike was a most valued member of the club, having joined it over 30 years ago.  He had held office as President twice, each time with marked success.  He served on various committees, chairing the Vocational Service committee while only in his second year of membership.

“Each commitment he took on was fulfilled with enthusiasm, flair and good humour. He took great delight in setting quizzes for the club and invariably presented the winners with a delightful gift, bought of course at his own expense.

“Mike was always ready to help and advise new members of the club and his mentoring was deeply appreciated.

“A man of the highest principles, he also knew how to enjoy himself and frequently served as a master of ceremonies at various events, always with great distinction and humour.

“Mike was a true proponent of the Rotary motto ‘Service above self’, always ready to volunteer for any job that needed doing.  In particular, until his health failed, he was an enthusiastic member of the team of drivers in the Dial-a-Ride organisation, which provides transport for elderly or disabled people who might otherwise be housebound.

“Everything that Mike did was done well.  He will be sadly missed by his many friends and particularly by the members of the Rotary Club of which he was such a distinguished member.”

Mr Law’s funeral will take place at St Collen’s Church at noon next Thursday, December 19, and then at Wrexham Crematorium at 1.30pm.
Posted by llanblogger at 7:21 AM