The aim was to inject some early Christmas spirit into a bleak winter evening.

And that’s exactly what was achieved by a talented cast from Llangollen Operatic Society when they staged their seasonal show, A Right Royle Christmas, at the Town Hall last night (Tuesday).

The title stems from the fact that running through the second half was a series of hilarious sketches paying homage to legendary TV comedy The Royle Family.

Presiding over the clan in all his flatulent, sweary majesty was Big Jim, ably and accurately portrayed by Operatic mainstay Bill Hughes, backed up on the couch by Alison Ravenscroft as the long-suffering Barb, Heather Wolfson as the dotty Nan, Helen Belton as the fag-wielding Denise, Shea Ferron as dopey Dave and Aled Morris as Our Anthony.

A couple of the sketch performers stepped out of their roles to double as pretty competent comperes, Bill Hughes doing the opening presentation and Shea Ferron handling the bits between segments of the show. You might say Shea actually tripled up as he also belted a very nice Younger Than Springtime from South Pacific in the first half.

It was songs, songs all the way right from the off, with members of the Young ‘Uns previewing a couple of numbers from their own production of The Wizard of Oz which hits the Town Hall stage from February 13 to 15 next year.

Simon Orton-Jones was next up to do a handy version of You’ll Be Back from the musical Hamilton followed by Sophie Preston with Once Upon a December just to remind is why we were here.

Josie Meredith took us back to the highs of The Sound of Music with Climb Every Mountain before Jill Handley and Josie Meredith dueted on the iconic White Christmas, Aled Morris, a star of the Young ‘Uns, moved the audience with Believe from Starlight Express and Heather Wolfson provided a thoughtful Candelight Carol.
The first half of the show ended with an extremely powerful Tell Me on a Sunday from Leigh Mason and The Prayer from Helen Belton and Simon Orton-Jones.

Sophie Roberts opened the second half by urging us to Have Yourself a Merry Little Christmas and Rian Andrews put her all into Ave Maria.

After the Royle Family had made its first of three appearances, it was on with the songs as Celyn Orton-Jones, another Young ‘Uns favourite, reminded us to Never Fall in Love with an Elf, the successful duo of Jill Handley and Rachel Dobson returned with I Know Him So Well of happy 1980s memory and Dan May, the co-producer of this great show along with Grace Goff, presented O Holy Night.

The Royles stayed on stage to lead a bit of audience participation starting with the Slade’s obiquitous Merry Christmas Everybody and continuing with John Lennon’s War is Over and Jingle Bell Rock.

There were a couple of carols before the big finale of Twelve Days of Christmas which not only had the audience singing along urged on from the stage by Shea Ferron but also springing to their feet in the appropriate places.

The big day might still be three weeks away but the Operatic crowd made it feel like it had already arrived in Llan. 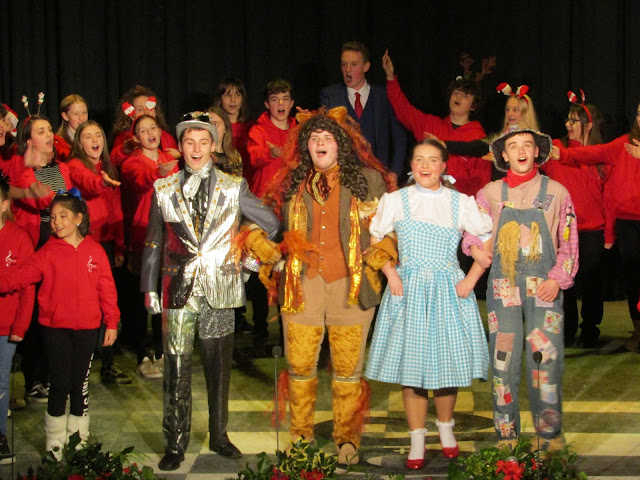 * The Young 'Uns cast from The Wizard of Oz. 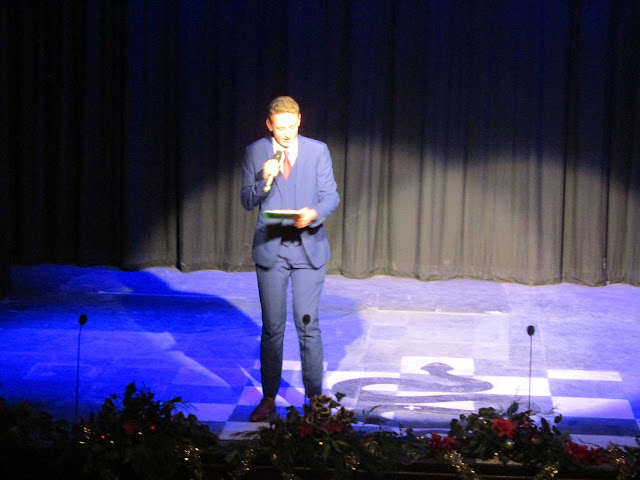 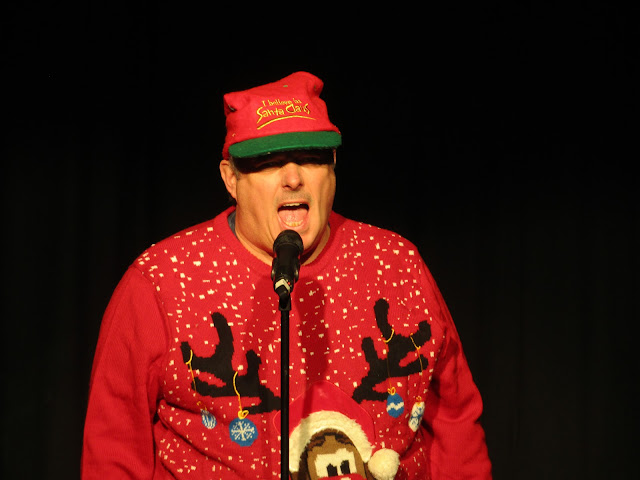 * Simon Orton-Jones with a number from Hamilton. 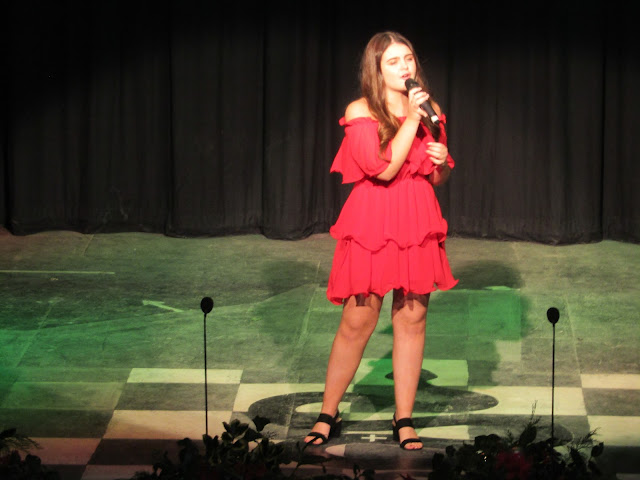 * Once Upon a December from Sophie Preston. * Bill Hughes does some announcing and later played Jim in the Royle sketches. 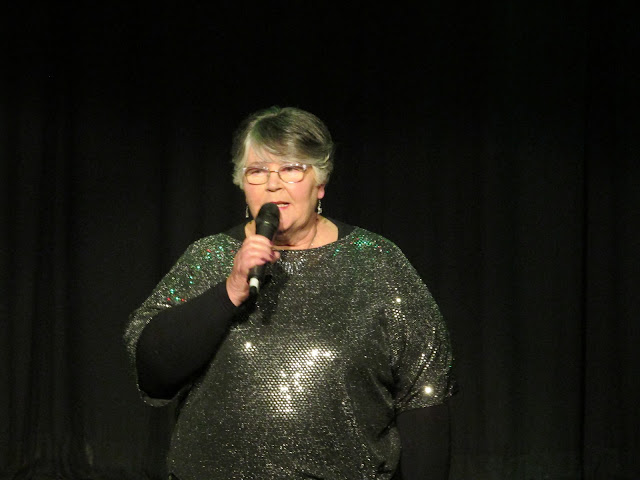 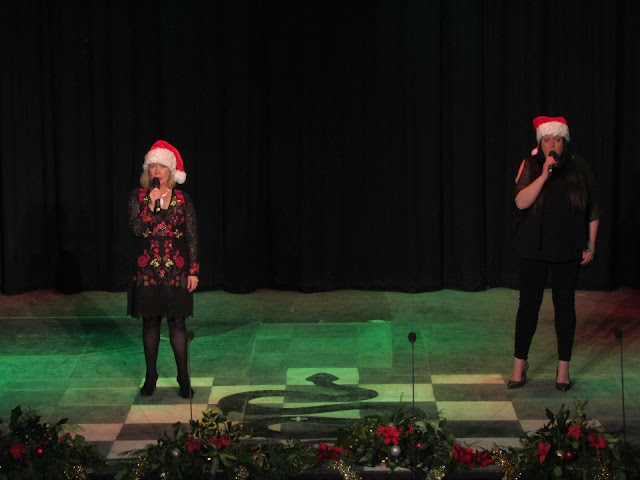 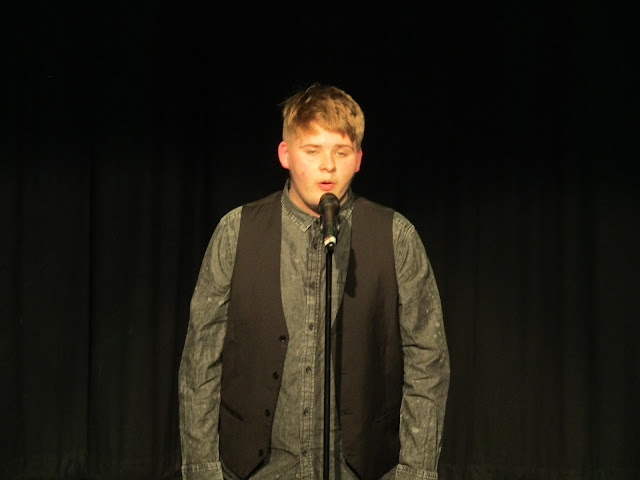 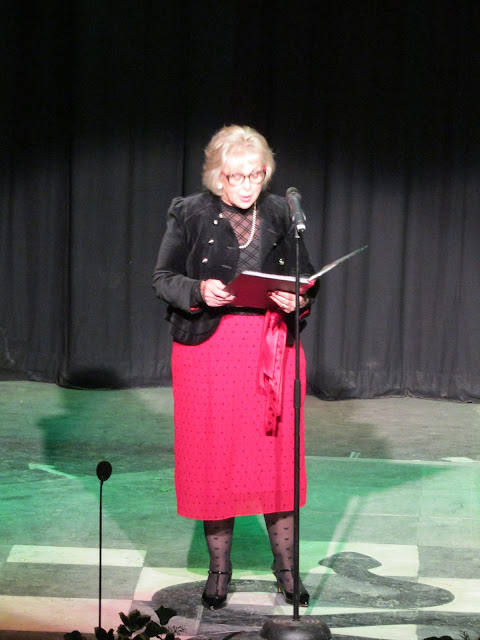 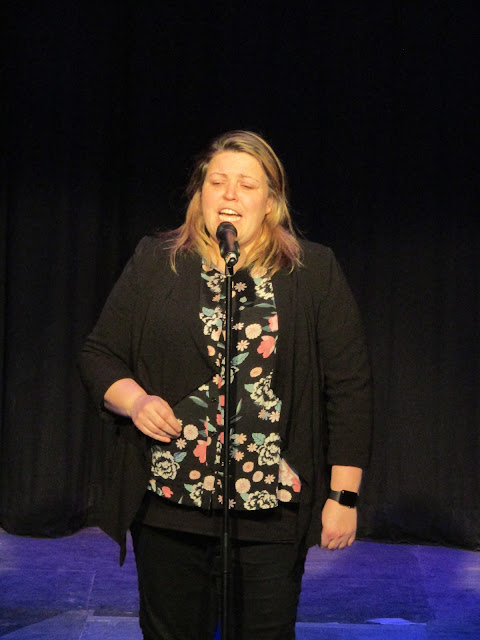 * Leigh Mason belts out Tell Me on a Sunday. 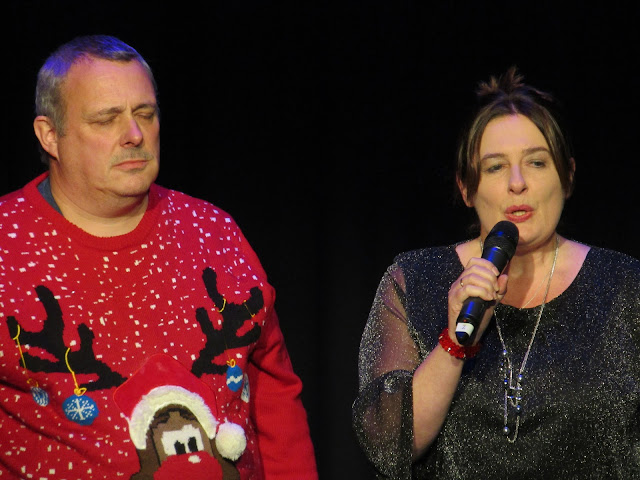 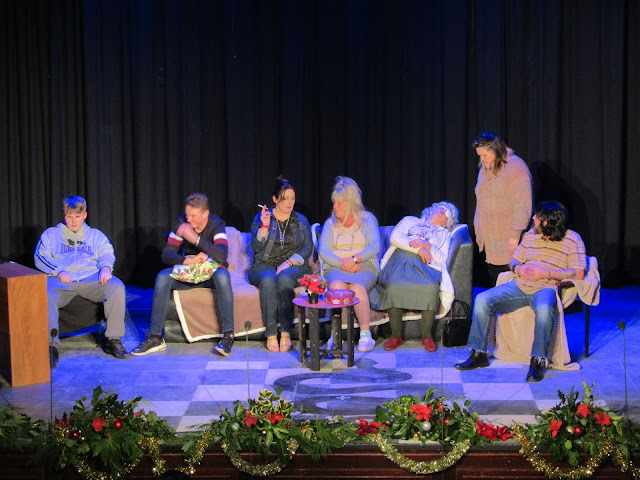 * The Royle family in all their glory. 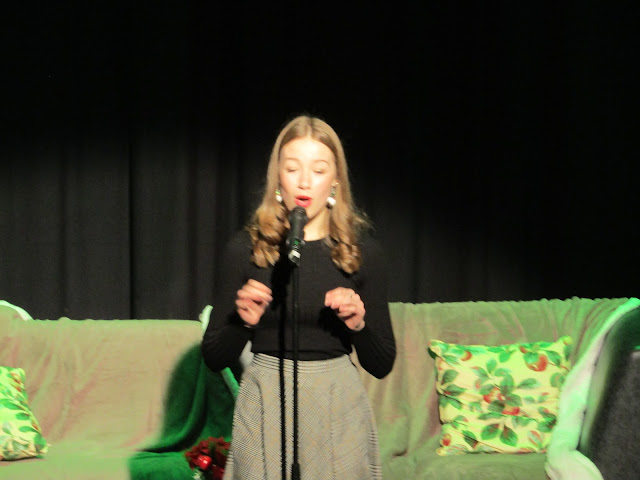 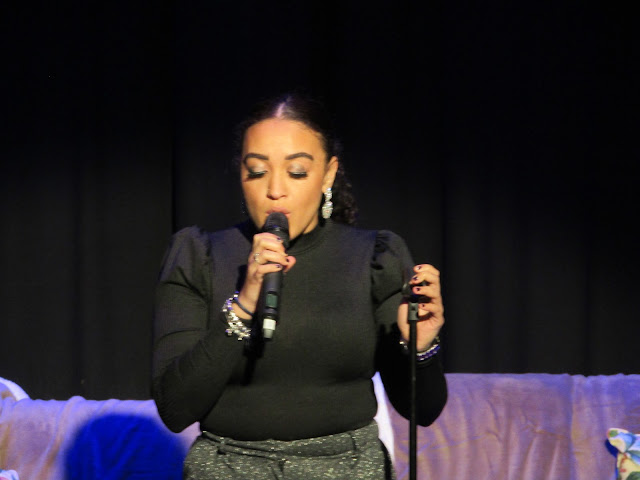 * It's Ave Maria from Riah Andrews. 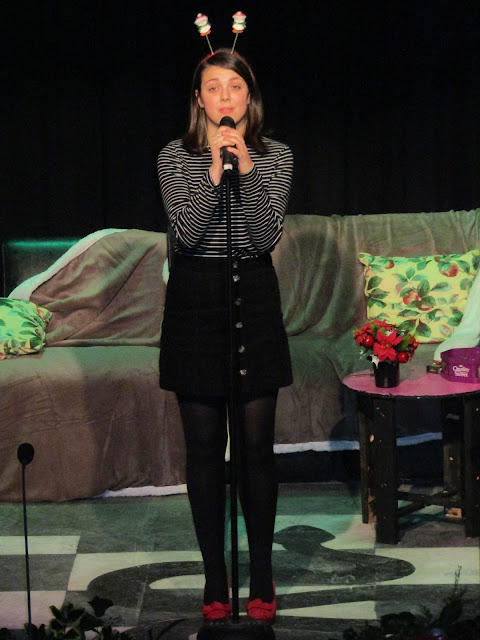 * Celyn Orton-Jones has timely advice about falling in love with an elf. 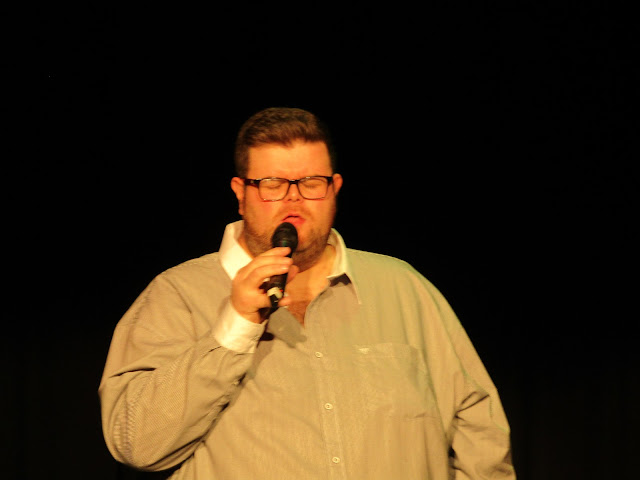 * Co-producer and soloist Dan May. 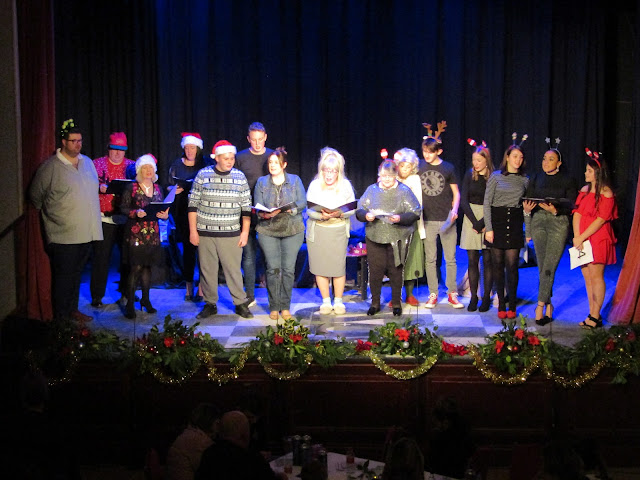 * The entire cast take the stage for the finale. 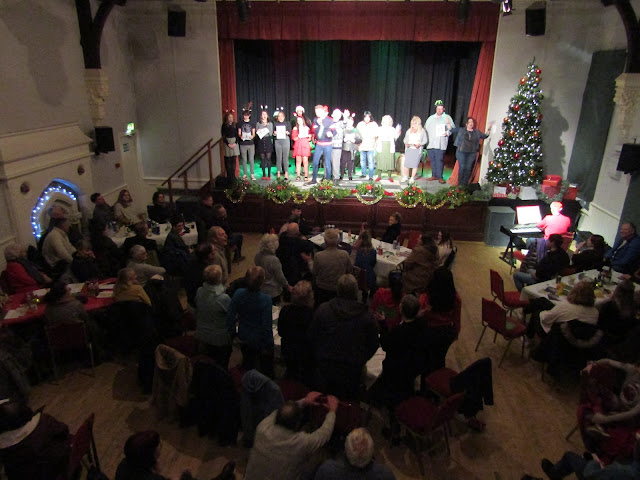 * The audience are up on their feet for the Twelve Days of Christmas.
Posted by llanblogger at 11:06 AM