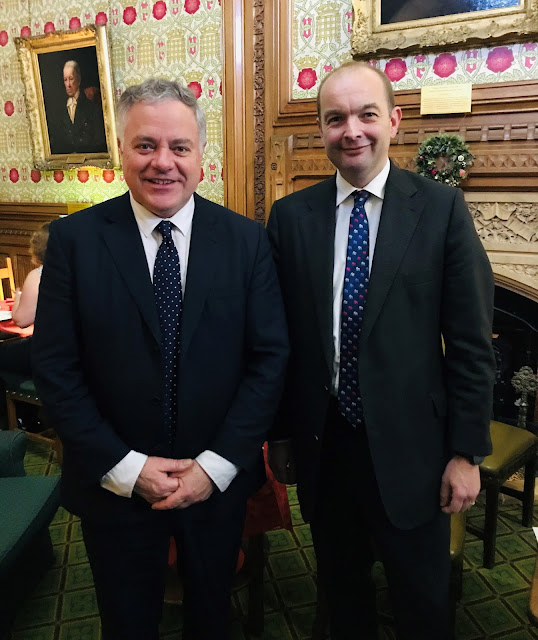 Simon Baynes MP fulfilled his promise to voters in Clwyd South by voting, for the first time as a new MP, for the Second Reading in Parliament of the EU Withdrawal Agreement Bill which passed by a majority of 124 yesterday.

The Withdrawal Agreement Bill will ensure that the UK ceases to be an EU Member State at 23:00 on 31 January 2019.

At this point the EU Communities Act 1972 will be repealed and the UK will enter the implementation period.

Earlier in the day, Mr Baynes met with the Brexit Minister James Duddridge MP to discuss the Brexit bill before the parliamentary debate.

The Withdrawal Agreement will take Britain out of all EU laws and aims to allow the UK to strike its own free trade deals.

It will also end the direct jurisdiction of the European Court in Britain and mean that the UK government rather than the EU will be in control of taxes.

It will ensure that Northern Ireland will be in the UK customs territory and it will abolish the backstop.

Any further delay will be avoided by ruling out any extension to the implementation period beyond 2020.

It will end free movement of people and a new Immigration and Social Security Co-Ordination Bill will create an Australian-style points-based immigration system which the Government says will "welcome skilled workers from across the world to contribute to the United Kingdom’s economy, communities and public services".

The Withdrawal Agreement will be complemented by a new Employment Bill which will protect and enhance workers rights, making Britain the best place in the world to work.

There will also be a new Environment Bill which the government claims will transform the UK’s environmental governance after leaving the EU by putting environmental principles into law, introducing legally binding targets, and establishing a new Office for Environmental Protection.

Simon Baynes said: “It was a great honour to vote as the new MP for Clwyd South in today’s historic vote in parliament which will ensure that we finally release the country from the stranglehold of indecision, restoring confidence to people and businesses and get Brexit done.

"The Queen’s Speech set out not only how we will leave the EU but how we will maximise the opportunities of Brexit – taking back control of our money, our laws, our trade and our borders, introducing an Australian style points-based immigration system and investing in the NHS.

"We will work around the clock to repay the trust millions of voters placed in this People’s Government and ensure that work starts with getting Brexit done.

"At the beginning of the new decade, at the beginning of a new dawn for our country, our Parliamentarians will return to Westminster to immediately finish the job, take us out of the EU on 31 January and move this country forward.”
Posted by llanblogger at 7:34 AM