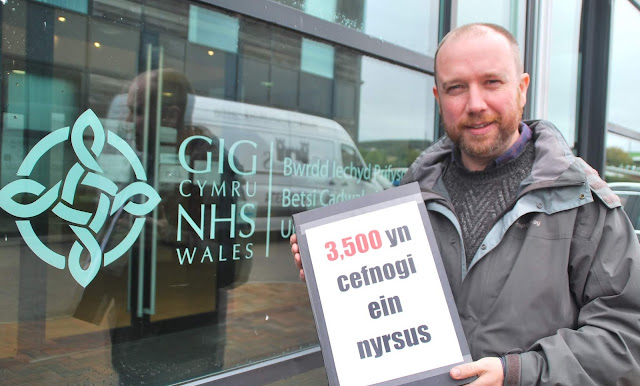 A pioneering heart treatment service in north Wales faces the axe as the local health board looks to make savings, it has been claimed.


But this has been denied by a board spokesperson.

Since 2015, Betsi Cadwaladr University Health Board (BCUHB) has funded the heart failure service - a series of community hospital based one-stop diagnostic clinics, heart failure nurses and pharmacists - to look after the most seriously ill heart patients.

The money was designated as “spend to save” and has resulted in significant savings for the health board, hospitals and their patients.

But health campaigner Mabon ap Gwynfor, Plaid Cymru's National Assembly candidate in Dwyfor Meirionnydd, says the board's "dire" financial situation means that there is no core funding to continue the service in the longer term.

He said: "The service has been shown to prevent between a quarter and a half of heart-failure patients being admitted to a district general hospital.

"Concerned GPs contacted me over plans to cut funding last month and the service has had a six-month extension. However, the future of the service remains uncertain and is likely to deteriorate further without guarantees of long-term funding."

He added: "The health board has spent the last year unable to decide on whether to continue the service funding, despite the evidence presented of lives improved and hospital admissions saved.

"GPs say this has exposed serious deficiencies in the health board management’s ability to make simple decisions. Despite intense lobbying of different managers and executives, the board’s funding lapsed and the service was due to be disbanded until a last-minute temporary reprieve.

“The community heart failure service is saving around £1.5 million each year in direct inpatient hospital costs, not to mention the benefits in patient safety, lives saved and quality of life improved, enabling our DGHs to avoid further overcrowding.

"With further investment to a total of £600,000, the service could be extended across the region and make the £2.5 million annual savings that it was on the verge of reaching previously."

Mr ap Gwynfor said he was disappointed that a service that was delivering good outcomes for patients and making savings was "under threat" and called on the health minister, who has direct control over BCUHB, due to it being in special measures, to intervene.

But a BCUHB spokesperson said: “It’s entirely wrong to suggest we are looking to cut funding to this service.

“We asked the service to complete a business case which takes into account an evaluation of the service and its performance, as well as detail on how it can be replicated in other areas of North Wales.

"As with all requests the health board receives to commit funding, we need to go through a robust evaluation of the benefits of non-recurring projects to ensure the best use of public funds.

“This request for a business case is not about stopping the service, but about ensuring we have the best approach to providing this service to people across North Wales.

“More work is needed to ensure this business case takes into account the future development and provision of the service.

“We fully recognise the value of the heart failure service, and are actively working with the service so that, together, we can continue to ensure this service remains available to people in North Wales.”
Posted by llanblogger at 7:20 AM