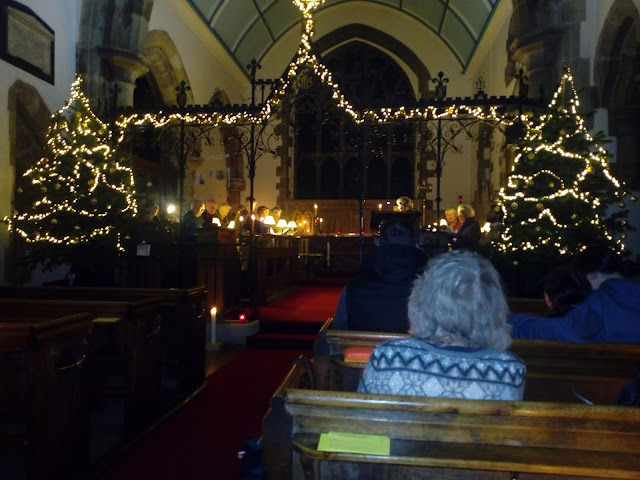 The event began, literally, on an atmospheric note with the first verse of Once in Royal David's City being sung from the back of the church.

The refrain was taken up by the powerful choir who added the second verse and the rest of the favourite carol was sung by the congregration.

The service, for which the church lights were switched off and the congregation held lighted candles, was interspersed with prayers led by the vicar, Father Lee Taylor, and readings by various people closely associated with the town.

Further favourite carols, augmented by or performed solely by the choir, included While Shepherds Watched Their Flocks by Night, We Three Kings of Orient Are, O Come All Ye Faithful and, finally, Hark! the Herald Angels Sing.

St Collen's has its Crib Service at 4pm tomorrow (Christmas Eve) for which children are invited to come dressed as their favourite nativity character, and Midnight Mass at 11.30pm tomorrow.
Posted by llanblogger at 6:40 AM