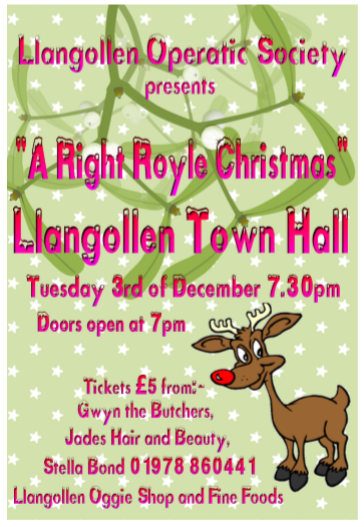 The first act of the special production, which has been jointly produced by Dan May and Grace Goff, opens with the society’s junior section, the Young ‘Uns, presenting a selection of songs from their latest show, Wizard of Oz, which runs at the Town Hall from February 13-15.

With Shea Ferron as compere, it continues with songs from performers who have appeared with the Operatic and other local groups.

Running through the second act is a special seasonal parody of hit TV comedy the Royle Family.

More songs will come from Sophie Roberts, Dean Richards, Riah Andrews, Celyn Orton-Jones, Dan May and those who have already been on stage in the first half.

The Operatic Chorus takes the stage to provide a selection of Christmas songs before the finale when the audience will be encouraged to join in with carols and other numbers.

* Tickets details are on the poster above.
Posted by llanblogger at 6:35 AM