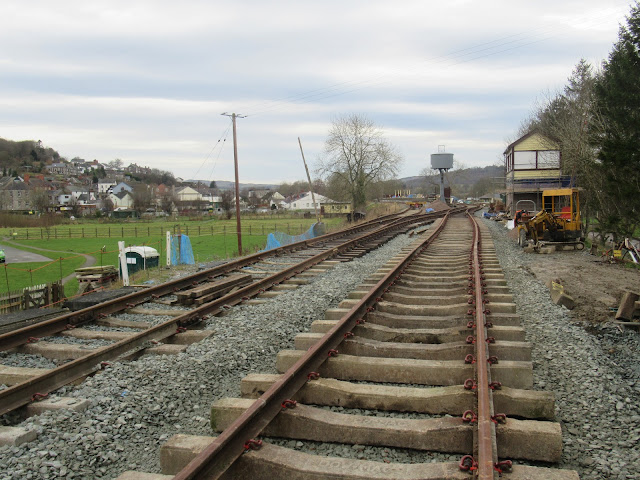 * The new track looking west into the station site.

The Llangollen Railway Trust is in line for an award for the work put in by its volunteers to complete a new track layout for the Corwen station project.

The Trust has been listed for the Heritage Railway Association's 2020 Award for Large Groups for the completion of the trackwork to connect with the extension railhead into the station site.

There are five entries in the Large Group category with competition from projects including the Ffestiniog & Welsh Highland Railway, TalyLlyn Railway, Isle of Wight Steam Railway and the Volk's Electric Railway at Brighton.

The winner will be unveiled at the annual Heritage Railways Association Awards night to be held in Birmingham on February 8 when the shortlisted entries in all categories are announced.

George Jones, spokesman for the Corwen project, said. "We hope the immense effort to infill the gap in the embankment and lay a new rail formation across it during the course of the past eight months will receive appropriate recognition at the awards ceremony, although we recognise we are up against some stiff competition."

Following the Golden Fishplate occasion on December 10 the volunteers continued to work laying track for the siding and completed the 300 ft length on December 21. There is a now an impressive length of double track on the final approach to the Corwen terminus where once there had been a void in the embankment.

Looking forward to the New Year, the project members plan to concentrate on completion of the island platform with the insertion of drains, installation of lamp posts and running-in board, and the final pair of canopy columns, with a need to level up the infill material and spread fine grain sand ready for the pavers.

There is also the matter on completing the gap in the platform wall, which has provided road vehicle access, with the final layer of easi-blocs and platform edging.

All this represents a lot of work for the project volunteers, who are mainly retired and working on the basis of three day a week.

Ballasting, packing and alignment of the track in the platform loop, with the aid of a hired in tamper machine, will follow before an official inspection later in the year.

If all this can be achieved, the new station will open on a date to be announced in 2020. It is all subject to available resources and continued support to complete the project.
Posted by llanblogger at 1:15 PM