Railway puts final link on the line in place 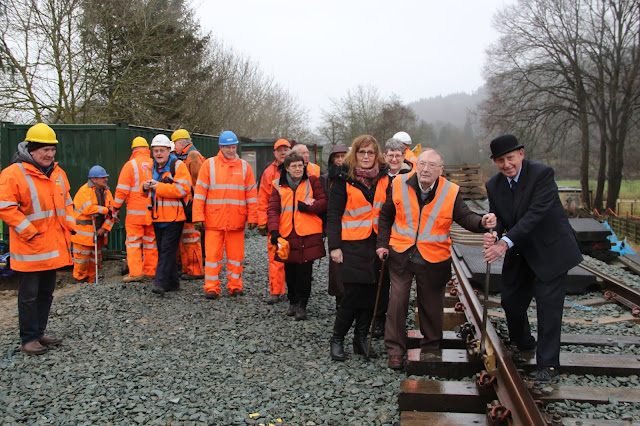 * Bill Shakespeare MBE and Gordon Heddon heave on the big spanner to fix the bolts to the symbolic fishplate joining the rails.

A railway conservationists' dream going back almost 45 years finally came true when the final section of the line between Llangollen and Corwen was put in place.

The linking of the trackwork at Corwen station with the track extension railhead from Carrog was marked by the fixing of a golden fishplate to the rails on the site of the former gap in the railway embankment.

Llangollen Railway Trust President Bill Shakespeare MBE and Vice President Gordon Heddon were helped to heave on the big spanners to fix the bolts to the symbolic fishplate to join the rails.

The occasion marked the official completion of the trackwork which now runs the full ten miles from Llangollen station to the buffer stop at Green Lane, Corwen.

It finally fulfils the dream of restoring the railway as envisaged by the pioneering preservationists back in 1975 to rebuild the line through the Dee Valley from Llangollen to Corwen.

It also marks an important stage in the completion of the new Corwen station with the terminal trackwork loop now in place around the island platform.

This stage of the project has been a work-in-progress since April 2019, when the gap in the embankment was infilled to restore the railway formation.

Much planning and design work followed before site preparation during the autumn allowed for the setting out of two sets of points for the eastern end of the loop and access to a siding.

Following the manual effort on the fishplate, the Road Rail Vehicle moved through the rail connection from platform 1 to demonstrate the completion of the loop.

Members of the Corwen Project team were on site to meet invited members of the Corwen community who have supported the building of the station. The party adjourned to the new station building adjacent to the town car park for light refreshments and BBC Wales attended to record the occasion for Wales News.

Volunteer Project Manager, Richard Dixon-Gough said: “Today’s celebration acknowledges all the hard work that has been completed by our dedicated volunteer work force to bring this highly complex trackwork project to a conclusion. It is a momentous occasion, with the switches in place, the mainline is connected to the new build station platform and the run around loop completed.

"This represents a magnificent effort and is truly a very notable step forward in completing the extension of the railway into the centre of Corwen.

“With the connection of the track, within the station confines, to the existing railhead, it completes the original aim of returning the railway link between Llangollen and Corwen.

“Over the past 44 years many people have contributed and supported the workforce thus helping to bring a heritage railway to the Dee Valley for all to enjoy travelling along this most scenic valley by train and experience the wonderful views from the comfort of a heritage railway vehicle.

“Without their support the project would not have succeeded.

“The full 10 miles will be operational through to Corwen in 2020 if we can continue to meet the challenges which the remaining work on the new build station platform represents.”

Llangollen Railway President, Bill Shakespeare MBE, aged 92, said: “I am delighted to be involved in today's golden fishplate occasion when we celebrate completing the track layout at Corwen.

"Little did I think when the first track was laid at Llangollen back in 1975 it would take so long to reach a new build station at Corwen.

"The volunteer workforce has done brilliantly with the limited resources available. The job has been done, so it is right we pause for a little celebration and can look forward to the station opening in 2020.”

Llangollen Railway Trust Vice President, Gordon Heddon said: “It gives me great pleasure to be here today to mark the completion of the trackwork at Corwen. When, as Chairman of Llangollen Railway, I initiated the Corwen extension project on 2004, I little realised how complex the whole process would be in the face of modern rules and regulations.

"That it was necessary to split the project into two phases to provide temporary station facilities for trains in 2014 is now apparent by the size and scale of the Corwen terminal station which is coming to a completion. This achievement has only been possible by the sheer determination of the volunteer members of the project team and the financial support of our members and well-wishers who have contributed towards the cost of the project.”
Posted by llanblogger at 7:36 AM