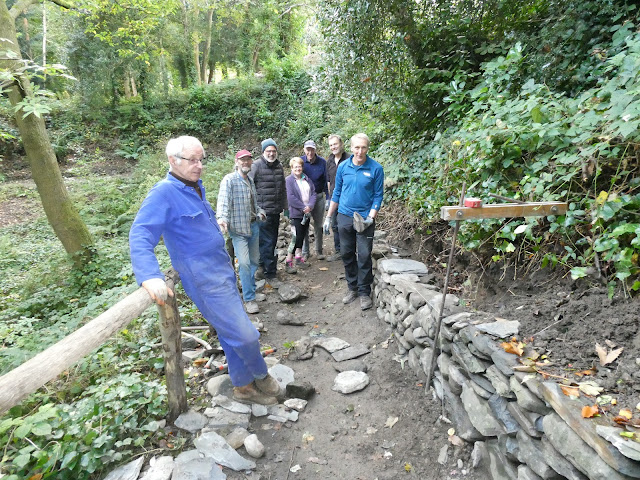 * The volunteer dray stone wallers in the Dell at Plas Newydd.

A team of volunteers have been busy learning new traditional skills and putting them to use at Plas Newydd.

The Dell is the Ladies of Llangollen’s naturalistic garden and some of the 200-year-old revetment walls there are crumbling and falling into disrepair.

The Our Picturesque Landscape, which is National Lottery Heritage funded, is leading on a five-year restoration of the Dell which has started this autumn with repairing many of the crumbling stone walls holding up the banks leading into the Dell.

Led by experienced Richard Jones of RJ Countryside Skills the volunteers have learned the skills involved in removing a crumbling wall and how to rebuild it to last another two centuries.

As part of the work a time capsule has been buried in the wall for someone to find long into the future, detailing who repaired the wall and why.

Other projects within the restoration programme are the creation of stepping stones across Afon Cyflymen which flows through the Dell, repairing the steps leading up to the summer house, creating a bog garden, extra seating and replacing the existing handrail with something more in keeping with the garden as it would have been two hundred years ago.

Volunteers Paula Wilding and Dave Smith said: “This has provided an interesting feature leading visitors down from the historic formal heritage garden into the ladies' naturalistic planting within the Dell.”

* If you would like to get involved by volunteering with the restoration, please get in touch with the team on 01824 706163 or contact:  our.picturesque.landscape@denbighshire.gov.uk
Posted by llanblogger at 6:46 AM