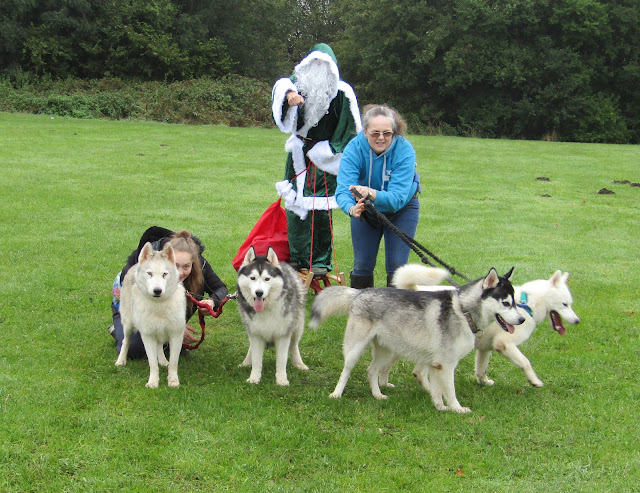 Sion Corn – the Welsh Santa Claus – has been checking out the quickest way to reach Llangollen when the town stages its annual Christmas Festival on Saturday November 30.

As Sion Corn will be starring in the traditional parade and wants to make sure he’s there in good time on the day he’s been trying out various modes of travel.

And he reckons he had the most fun so far when he put a pack of Siberian Huskies to the test.

The magnificent dogs are part of the Wrexham-based Wolf Pack which races regularly across the UK and will be making a special guest appearance alongside him in the big parade on festival day.

Wolf Pack owns 11 huskies, nine of which are Siberian, one an Alaskan and another a Northern Inute Kelip.
All the huskies are looked after by Rob and Natalie Hallmark Jones and their daughter Holly who helped Sion Corn get the feel of the reins as he settled in behind the team during his practice session.

Later he said: “That was very exciting and you wouldn’t believe how fast these fantastic dogs can travel. I should be able to make it from Lapland to Llangollen in no time on festival day.”

Kicking off at 1pm with the famous parade, which sees Sion Corn being escorted into town over the historic bridge by a colourful cavalcade of entertainers and local groups, the event features children’s fairground rides, food stalls, choirs, craft stalls, circus acts and face painting.

Festival organisers have also arranged for free parking throughout the day at local car parks.
Posted by llanblogger at 10:59 AM