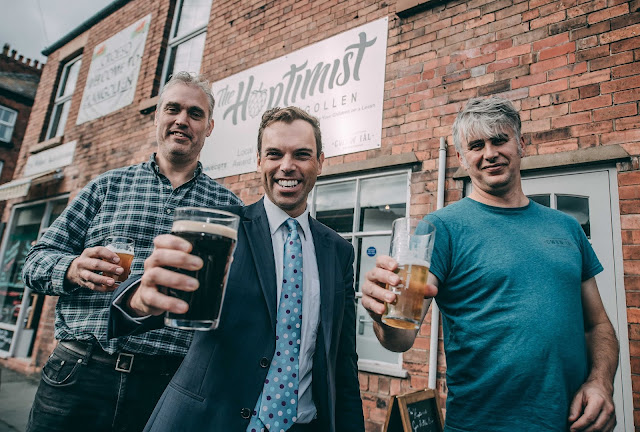 * Welsh economy minister Ken Skates toasts the opening of The Hoptimist in Llangollen with Richard Green, left, of Dovecote Brewery, and Doug McPherson, of Cwrw Ial.
A new micro pub in Llangollen has banned electronic music and games in favour of good old fashioned conversation.
The Hoptimist, in Market Street, is the latest venture by a partnership of two craft brewers from Denbighshire, Richard Green, of Denbigh’s Dovecote Brewery and Doug McPherson, of Cwrw Ial, from Eryrys, near Mold.
The Llangollen branch of their budding beer empire is the third to open in a year – the first was The Hoptimist in Abergele, followed soon afterwards by a branch in Rhuddlan.
The latest addition to the stable got the thumbs up from local Assembly Member for Clwyd South Ken Skates, the Welsh Government Economy Minister, who dropped in to sample some of the craft beers and ciders they sell – along with a range of flavoured gins made by Richard’s wife, Sue.
He even sampled a fruit cider in a shade of brilliant green and said: “It’s brilliant to see The Hoptimist in Llangollen – it works perfectly with the character of the town.
“Llangollen attracts visitors from around the world and it’s great to see a place like this offering a range of the very best craft ales, many of them produced here in North East Wales.
“Craft beers are all the rage these days and at The Hoptimist you can be guaranteed a genuine taste of the region – they’re putting the ales in Wales.”
Richard and Doug took over the premises on the corner of Market Street and East Street three months ago and have a tenant of their own, a small bakery which sells a range of pies, pastries and Wales’s answer to the Cornish pasty, the oggie.
Richard, whose Dovecote Brewery recently reopened The Salusbury Arms in his home village of Tremeirchion, near St Asaph, also has its own brand micro pubs, The Dove, in Rhyl and Prestatyn.
He said: “This is a really good spot and Llangollen is a perfect town for us as it’s busy all year round.
“We’ve even got the bakery next door so you can pick up your pie and bring it in to enjoy with your pint.
“Doug and I met at a CAMRA – Campaign for Real Ale  - meeting when we’d just set up Dovecote and we didn’t want to be in competition and thought it would work better to be in a partnership.”
Doug, a New Zealander who got into home brewing because when he was growing up the legal age for drinking was 21, said: “It can be difficult for micro-brewers like us to get their beer into pubs so we thought it would make sense to have our own pubs to sell our beer in.
“It’s working very well. Although the craft beer market is still relatively small it’s growing all the time and we are looking at further openings in the future.”
Both breweries produce a range of craft beers using traditional methods but often tweaking the recipes to produce different products like Dovecote’s award-winning Dove Down Under, made with New Zealand hops, and both also include special seasonal beers in their repertoire.
Richard, an industrial chemist from Walsall, in the West Midlands, was persuaded by Sue to turn his home brewing hobby into a business just over two years ago while Doug has been in the brewing industry for 27 years but branched out on his own at Cwrw Iȃl in 2014.
All their beers are 90 per cent made with local ingredients including Welsh–grown hops and barley and adhere to the 503-year-old German Purity Laws which insist that beer can only be made from water, hops, barley and yeast.
Richard added: “We want to grow a self-sustainable business and that’s why it made perfect economic sense to open our own pubs which have a unique atmosphere.
“You won’t find electronic music or games here but you will find a warm welcome, an interesting range of beers, ciders and gins, board games and good conversation.
“Our pubs are smaller and more intimate than most pubs but here in Llangollen we have space upstairs for table football and darts and it’s a good venue for meetings as well and we have a great choice of craft beers, gins and ciders.
“The footprint of each Dove or Hoptimist outlet is more compact than your usual pub, but we have a wide demographic and appeal to ladies and gents alike and we’re dog-friendly too.
“It’s something we believe in and we know it works and we’re hoping to announce further new openings soon.”
Posted by llanblogger at 7:31 AM