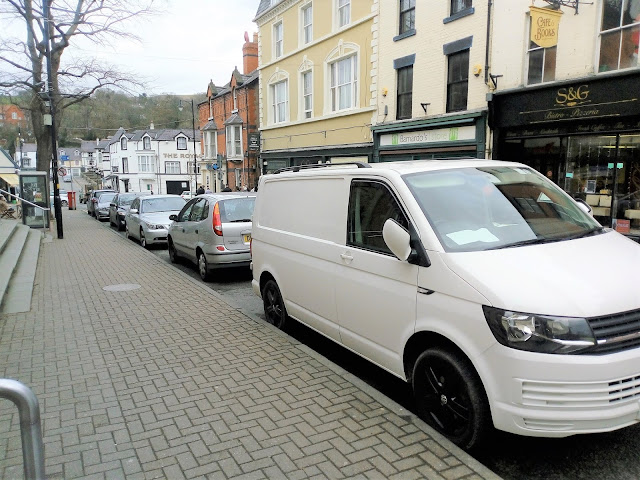 * The controversial issue of parking on Castle Street figured prominently in discussion.

Members of the Llangollen 2020 group which is aiming to re-shape parking and traffic strategy in the town centre held a public meeting yesterday (Thursday) evening to give people a chance to comment on their latest proposals.

Just over 30 residents and members of the business community went along to the Memorial Hall in Market Street to hear how the group plans to change parking provision in the years ahead.

The meeting was hosted by Llangollen county councillor Graham Timms, who chairs 2020, along with fellow group members County Councillor Melvyn Mile and Town Councillor Tony Baker.
Cllr Timms opened by saying the aim was to have the people of the town as a whole putting new parking ideas to the county council.

“It’s an attempt to solve what has been a problem in Llangollen since at least the 1960s,” he pointed out.

“We could spend the next 60 years falling out over it but that’s not what we want to do.”

2020 recently called for feedback on its parking proposals from people across the town but he said there had been little response from those in the John Street and West Street area, which was why the meeting had been arranged.

Cllr Timms went on to explain that the group was seeking to balance the interests of six different groups including residents, businesses, shoppers and visitors.

One of the most controversial aspects of the 2020 proposals was whether to ban parking along Castle Street, introducing wider pavements and loading bays to serve shops and businesses. There would be disabled parking bays in Oak Street, Bridge Street and Abbey Road.

It was Castle Street parking which caused most discussion at the meeting, some of it heated at times.
The landlord of The Bull pub, for instance, said he saw a problem bringing in beer supplies with the loading bays suggestion, claiming it would present a “serious danger to the public” if it went ahead.

Cllr Timms said the group would note this point.

Cllr Timms was then questioned closely by former town councillor Karen Edwards about exactly how many Castle Street shops and businesses had been asked for their views on the future of parking there.

Cllr Timms replied said that members of his group had “spoken to a few” about it and that Arcadis, the firm of consultants assisting 2020 with its proposals, had also spoken to some of the businesses.
Ms Edwards suggested this was not enough and said she and others had carried out their own extensive survey of Castle Street businesses and found that the majority were against banning parking.

It was suggested from the floor that 2020 goes back and speaks to all traders on Castle Street about the banning of parking and Cllr Timms replied: “We will address these concerns.”

It was at this point that the discussion became a little heated prompting Cllr Timms to make the plea: “Don’t attack us as though we are nasty people. We want the town to be a better place for everyone.”

The discussion then turned to reducing the speed of traffic on Castle, with Cllr Mile saying the Welsh Government intended to impose 20mph limits on all urban areas across the country.

“We would like this to happen on Castle Street but of it doesn’t we will tell the government that we want it done,” he added.

When it came to how residents figure in the 2020 parking proposals, one lady said that although she lives on the A5 she had to seek parking elsewhere in the town as there was none available near her home.

Cllr Mile said the answer to this was the 2020 proposal to designate all streets in a central “zone” for residents’ priority parking with people being asked to buy up to two parking passes - £50 for the first car and £100 for a second.

The parking pass would be valid for parking in all on-road parking areas and all car parks in the town at all times.

When it came to business parking Cllr Timms explained the current county council pass, which was valid all year round, would change and would not be valid in the Market Street and East Street parks on weekends and bank holidays and throughout the busy months of July and August during the school holidays.

To offset this, he said, discussions had been taking place with the headteacher of Ysgol Dinas Bran to use a section of its car park for businesses owners and workers displaced.from the two car parks.

Also under discussion was the idea of visitors to major events at Llangollen Railway being able to park on the eisteddfod land.

The 2020 party was then questioned on funding for their proposals and they replied although they believed amounts may be available from various sources, not all of the necessary cash had been secured.

Cllr Timms has said in the past he estimates the whole package would cost between £2-3 million to implement. 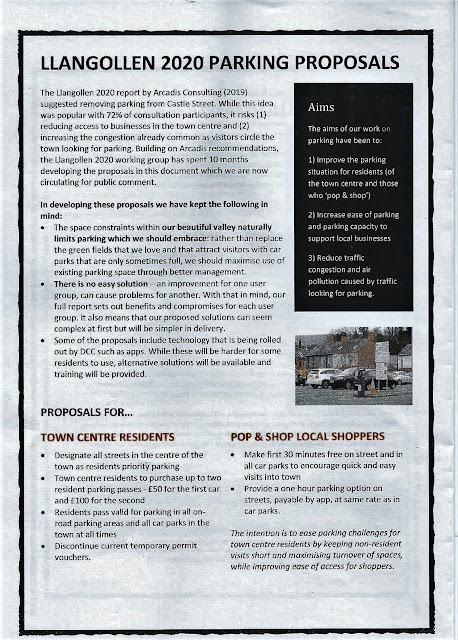 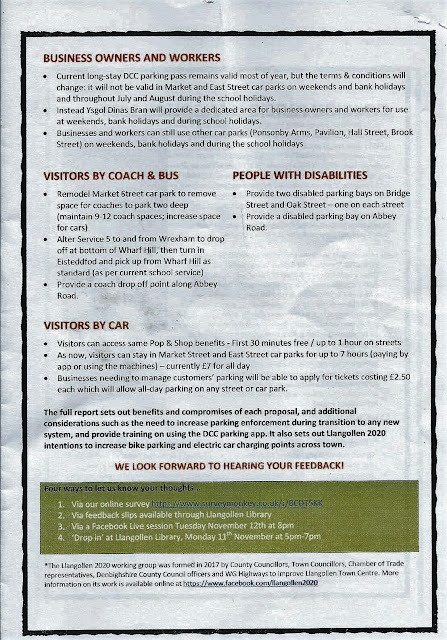