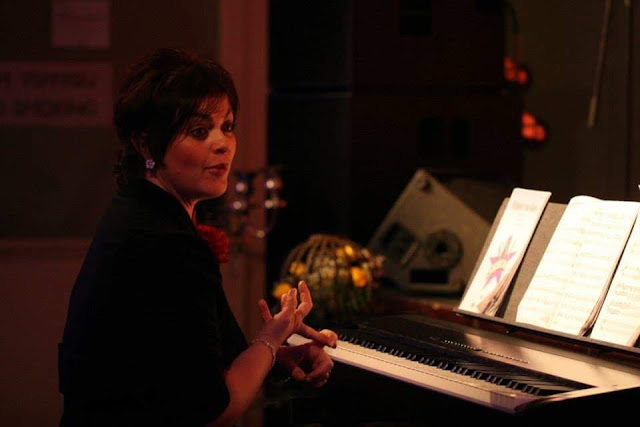 * Elen Mair Roberts is to be musical director on Voices From the Valley in London next April.

A busy music teacher from Llangollen has been chosen to mastermind the melodies of a musical theatre show in London’s West End in aid of a charity which aims to prevent suicides.

Profits from the performance will be donated to Papyrus, a suicide prevention charity.
Elen has been a peripatetic music teacher for just over 28 years, specialising in strings, piano and vocal training.

She runs both the Flintshire County Junior Choir and County Youth Choir and recently toured Tuscany with them.

Elen also formed a partnership to run a memory choir as part of the NHS mental health campaign and was recently nominated for a Betsi Cadwalader award for services to patient wellbeing through song.

On the local amateur stage scene she has been at various times musical director for Llangollen Operatic Society’s junior section the Young ‘Uns and for the main society with their award-winning productions of Sister Act, The Producers and 9 to 5, which was nominated for an amateur stage “Oscar”.

Apart from this Elen has been musical director for the Moreton Hall School productions of Grease, Little Shop of Horrors, School of Rock, The Addams Family and their latest production, Chicago.

On top of this she formed Llangollen Youth Choir, and was also in charge of music for Llangollen's show choir Stage2Stage.

Of her latest commission in London, Elen said: “I am very excited to have been invited to be musical director of this amazing show which has the most talented all-Welsh line-up you could imagine.

“It’s also in aid of a very worthy cause. Suicide is the biggest killer of young people – male and female – under 35 in the UK.

“Every year many thousands more attempt or contemplate suicide, harm themselves or suffer alone, afraid to speak openly about how they are feeling.

“Payrus exists to reduce the number of young people who take their own lives by shattering the stigma around suicide and equipping young people and their communities with the skills to recognise and respond to suicidal behaviour.”

* Voices From the Valley is on Sunday April 5 at 7.30pm and tickets are priced at £16.75.
To book, go to: https://artstheatrewestend.co.uk/whats-on/voices-from-the-valley/?fbclid=IwAR22e2o-GeVXDyQKTROl2auPjVxF0wj7RkyU9yp8mq_PiUwODepes3VgmKo
Posted by llanblogger at 6:51 AM