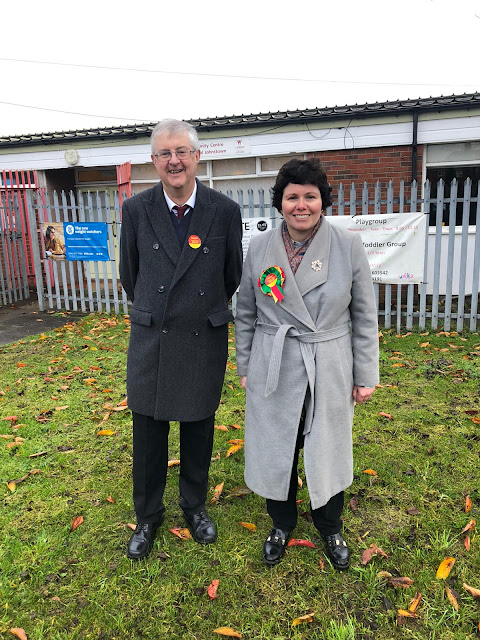 The First Minister for Wales launched the Welsh Labour manifesto in Wrexham on Monday and then hit the campaign trail in Johnstown.

Mr Drakeford said: "It was great to be in North Wales to launch the Welsh Labour manifesto for the general election and to outline how, with a UK Labour Government, people in this area can benefit from a £10 Living Wage, extra maternity and paternity rights, more investment in our NHS and new jobs through Labour’s Green Industrial Revolution.

“It was also good to go door knocking with Susan afterwards and to talk with people in Johnstown about our ideas. They know how out of touch Boris Johnson and the Tories are.

“Only a vote for Susan Elan Jones and a vote for Welsh Labour in this election can help make Clwyd South the stronger, fairer and more equal place we want it to be.”

Susan Elan Jones said: "It was fantastic to have Mark Drakeford here in Clwyd South. We spent our time going door-to-door meeting residents in Johnstown - a big contrast with the Tories’ stage-managed event.

“Overwhelmingly people spoke about the need for more investment in our communities. As one young woman put it, ‘the Tories don’t understand our local area and what we need’."

"People know I'm the only candidate who can stop the Tories sneaking in here and the only one who can stop Boris Johnson's Hard Right agenda."
Posted by llanblogger at 12:26 PM