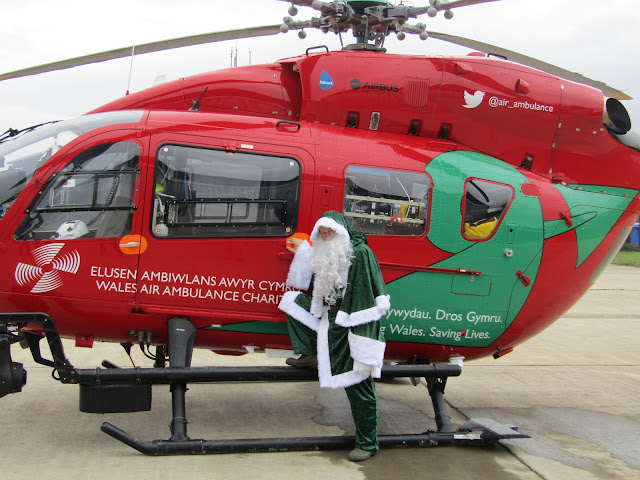 * Sion Corn tries out the Wales Air Ambulance
for his rapid arrival at Llangollen Christmas Festival on Saturday.


Sion Corn – the Welsh Santa Claus – has been checking out the quickest way to reach Llangollen when the town stages its annual Christmas Festival this Saturday November 30.

As Sion Corn will be starring in the traditional parade and wants to make sure he’s there in good time on the day he’s been trying out various modes of travel over the past few weeks.

And he reckons that by far the quickest way of reaching Llangollen from his home in the Far North is aboard the Wales Air Ambulance helicopter which the festival is once again this year raising funds to support along with local groups in the town.

So he went along to its base near Welshpool to check it out.

Later he said: “Apart from its fantastic range of lifesaving equipment and its dedicated crew, both medical and pilots, I was very impressed with how fast it can reach its patients.

“If it can be on the scene of an emergency so rapidly it shouldn’t take long at all for it to whisk me and my helpers across to Llangollen on the big day.

“My trip aboard the helicopter also convinced me the Christmas festival couldn’t be supporting a worthier cause.”

Kicking off at 1pm with the famous parade, which sees Sion Corn being escorted into town over the historic bridge by a colourful cavalcade of entertainers and local groups, this Saturday’s event features children’s fairground rides, food stalls, choirs, craft stalls, circus acts and face painting.

Festival organisers have also arranged for free parking throughout the day at local car parks.
Posted by llanblogger at 11:10 AM