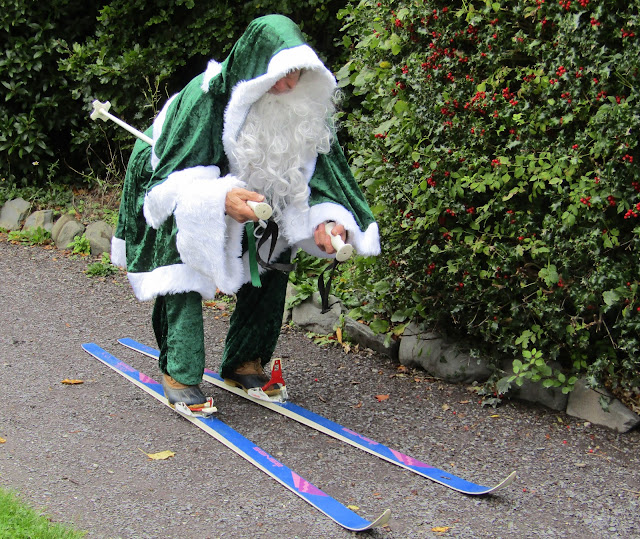 * Sion Corn heads for the festival on skis via Plas Newydd.

Siorn Corn – the Welsh Santa Claus – has been checking out the quickest way to reach Llangollen when it stages its annual Christmas Festival on Saturday November 30.

And as Sion Corn will be starring in the traditional parade and wants to make sure he’s there in good time on the day he’s been trying out various modes of travel.

First up was a pair of skis and he reckons they might do the trick.

He said: “It was a bit tough checking them out when there was no snow but I did find a suitable slope in the beautiful surroundings of Plas Newydd, home of the Ladies of Llangollen, which gave me some idea of what it would be like coming in from Lapland on the day.

“The holly berries that have appeared on the trees helped provide a festive atmosphere.”

Over the next few weeks Sion Corn will be trying out a few more ways of getting to Llangollen on time.

Kicking off at 1pm with the famous parade, which sees Sion Corn being escorted into town over the historic bridge by a colourful cavalcade of entertainers and local groups, the event features children’s fairground rides, food stalls, choirs, craft stalls, circus acts and face painting.

Festival organisers have also arranged for free parking throughout the day at local car parks.
Posted by llanblogger at 8:13 AM