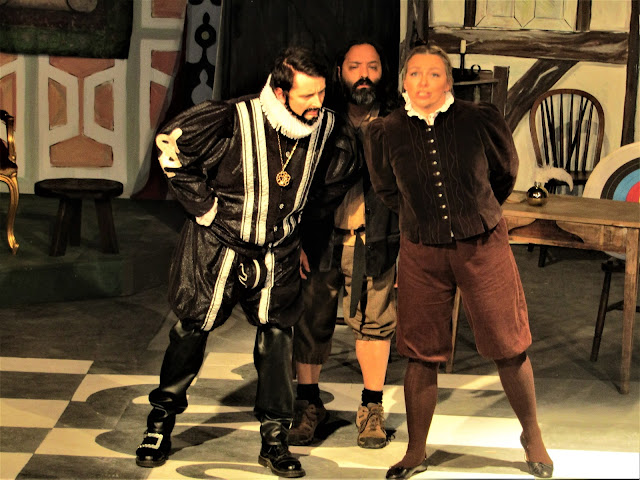 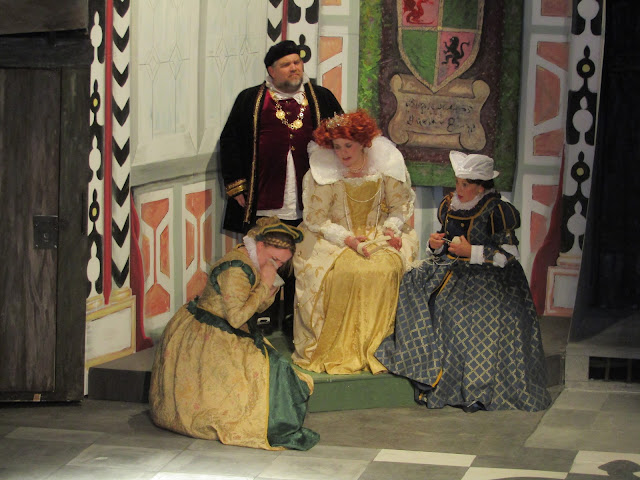 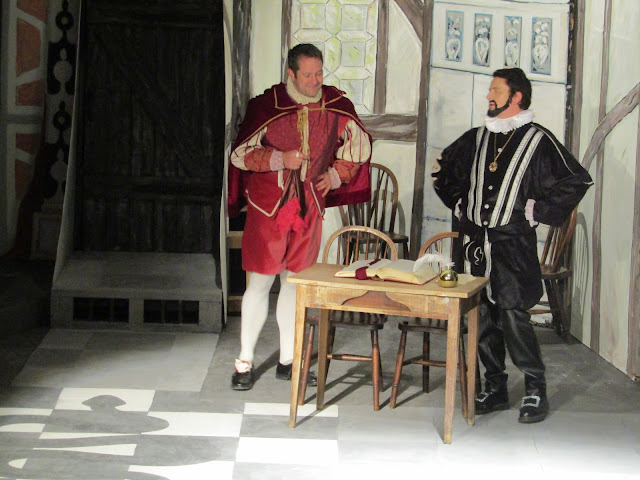 Llanblogger was given a sneak preview of Blackadder, the hilarious comedy which The Twenty Club brings to the Town Hall stage from tomorrow (Thursday) until Saturday

Members of Llangollen drama group The Twenty Club had a cunning plan to present three episodes of Blackadder in one performance charged with all the atmosphere and rollicking humour as the classic TV comedy penned by Richard Curtis and Ben Elton.

And, unlike most of the schemes hatched by Lord Blackadder’s intellectually challenged servant Baldrick, this one actually works, and works extremely well.

With every aspect of the production – setting, costumes, acting and direction - the attention to detail is simply stunning.

Charging ahead in the similarity stakes is Mat Oswald-Haggett as Blackadder – a man who looks, sounds and delivers his lines uncannily like the role’s famous originator, Rowan Atkinson. Where the club was lucky enough to find him, goodness knows but it seems to have a knack of finding precisely the right people for the leading comedy roles.

Apart from the obvious physical likeness, there in all its malevolent glory with Mat is the sardonic wit, the sarcasm and the lip-curling cruelty towards anyone whom he considers to be his inferior, particularly the long-suffering Baldrick.

Playing that down-trodden and malodorous side-kick with great skill is old Twenty Club hand Richard Mascarenhas – nobody can do things with a turnip quite like this guy.

The rest of the usual Blackadder suspects also line up to do incredible justice to their roles in this terrific triptych focusing on him in his Elizabethan incarnation.

Queenie is every bit as childish and petulant as we remember her from the telly thanks to a well observed performance by Emily Swindley while Nick Hawe is deliciously dopey as Lord Percy, Blackadder’s cousin.

Trying to emulate an actor who has become a national treasure partly for his portrayal of Lord Melchett, the queen’s snarling henchman, can’t be easy. But John Clifford takes on the role made famous by the great Stephen Fry with his usual all-round competence and confidence.

And Heather Wolfson, another Twenty Club regular, is just brilliant as Nursie, the woman always at hand to nanny Her Majesty.

We see this team shine in the episodes entitled Head – about Blackadder’s disastrous stint as Lord High Executioner; Bells which sees him fall oddly in love with young manservant who is actually a girl; and Beer about a booze-up he undertakes for a bet and which also lands him in heaps of trouble.

Each one is totally faithful to the way it was presented on the box and brings in some more excellent characterisations, such as those from Tracey Kempster-Jones as the gender-swap manservant Bob (Kate), David Connolly as her grasping father and also Lord Whiteadder, Howell Griffiths as Dr Leech, the doctor, Joe Clifford as the wonderfully over-the-top Flashheart and Sue Griffiths as the Wisewoman and Lady Whiteadder.

The costumes and impeccable and the setting and scenery are nothing short of brilliant and an absolute credit to the backstage crew headed up by producer Sian Glynne-Jones.

Also in line for honours is director Chrissie Ashworth who says in her programme notes that rehearsals were often difficult as both cast and crew were laughing so much. So it’s little wonder therefore that it does exactly the same to the audience.
Oh, and watch out for an unexpected touch from a usually purely dramatic group as the curtain falls.
Blackadder is on from Thursday-Saturday November 7-9 at 7.30pm with a matinee at 2.30pm on Saturday. Tickets: 01978 822759, Courtyard Books, Gwyn Davies Butchers, Jenni’s Llangollen,
hhttps://www.skiddle.com/whats-on/Llangollen/Llangollen-Town-Hall/Blackadder-II-Beer-Bells--Head/13651656/. There’s also more information on the Twenty Club website, www.twentyclub.co.uk
Posted by llanblogger at 6:35 AM