Panjabi group hit by string of bad luck dances on 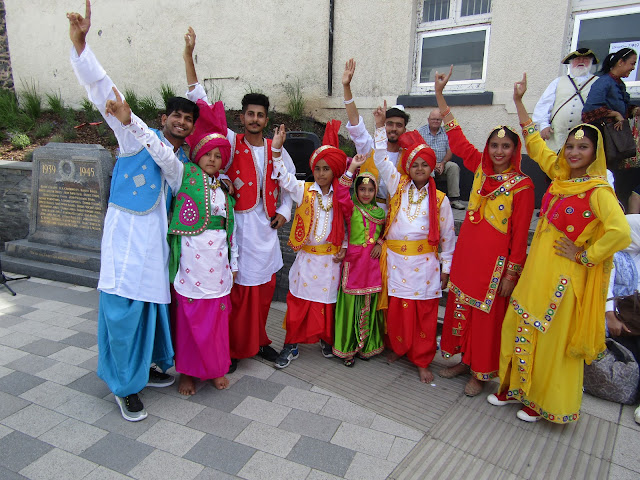 * Despite their bad luck the Heritage Dance Academy
from the Panjab delighted crowds when they danced in Centenary Square.

A dance group from India hasn’t enjoyed the best of luck on its first visit to the Llangollen Eisteddfod.

An 18-strong party of the colourful troupe were due to fly from their home in the Panjab to compete in the traditional folk dance competition at the festival on Wednesday.

First setback for the Heritage Dance Academy came when they discovered that only 18 of them would be granted visas for the trip which meant that six of the group would have to stay at home.

The second blow came when a large bag containing all their traditional instruments went missing somewhere during the journey.

And that meant that they were unable to take part in competition C3 against other groups from Malaysia, India, Zimbabwe, Northern Ireland and Wales because backing tracks cannot be used in place of live music.

But, undaunted by their bad luck, yesterday (Thursday) afternoon the group, minus a third of its members, still went through their stylish paces to the delight of scores of onlookers in Llangollen’s Centenary Square.

Group leader Ranbir Singh said: “We just left it too late to get the visas from the Indian government so only 12 of us were able to leave for Wales.

“Then, somewhere on the trip, a large bag containing all our instruments went missing. These were traditional ones made of wood or iron and a drum made from goat skin.

“We had still hoped to compete at the eisteddfod but, quite understandably, they wouldn’t let us because the instruments are all part of what we do and we couldn’t use backing tracks.

“We still wanted to dance somewhere, so when we were asked to perform in the town square I searched the internet for suitable bhangra backing music to download. We then played that over the sound system and the dance went ahead.”

Ranbir, who is flying home with the group on Sunday, added: “This was our first time in Llangollen and we’ve had some bad luck. Things got even worse for me because on my own flight my bag went missing.

“But despite all that we’ve had a great time here and are really glad we came.

“We definitely intend to come back next year - and this time we’ll be applying in good time for our visas.”
Posted by llanblogger at 7:02 AM