Kids challenge businesses to get greener 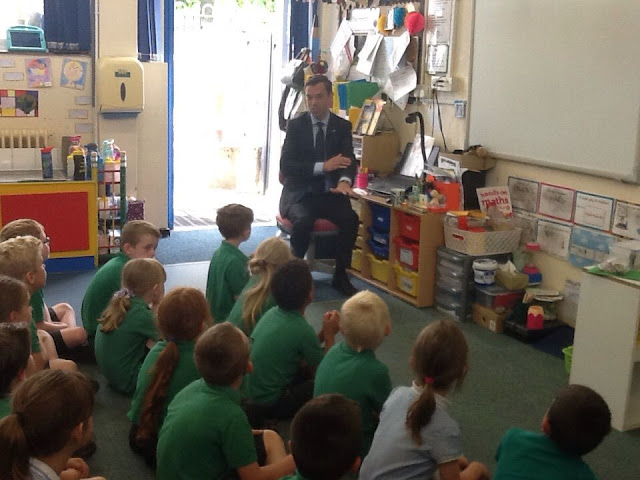 * Ken Skates AM with children at Ysgol Acrefair.

Schoolchildren and their Assembly Member are challenging local businesses to be more environmentally friendly.

The Welsh Government recently declared a climate emergency and outlined its plans for a greener Wales for future generations, and Mr Skates said he was inspired to see so many young people who shared his passion for protecting the environment.

The Clwyd South AM said ‘we all have a role to play’ – including local businesses.

“The children would like to see local shops and businesses stop selling and using plastic which can’t be recycled,” said Mr Skates.

“They are very clued-up on this issue, which is fantastic to see, and are only too aware of the problems it causes for wildlife.

“It was amazing to meet so many children of such a young age who want to make a difference and I would like to sincerely thank the school for inviting me in – it was a genuinely inspiring morning and made me feel very proud.”

Headteacher Rebecca Turner said: “At Ysgol Acrefair, we have been very busy exploring and developing the four core purposes of the new curriculum for Wales. As part of the work on developing as ‘ethical, informed citizens’, the children have been finding out about sustainability. They were worried to see how much of our waste isn't recyclable, including the single-use plastic straws that come with their milk each day.

“The children were really inspired by Ken's visit. They thoroughly enjoyed finding out about Ken's job and how he himself tries to be sustainable. They can't wait to see Ken again to see if he has found the answers to some of their tricky questions!”

Mr Skates also talked about what is being done at a national level to protect the planet.
The Welsh Government has committed to achieving a carbon neutral public sector by 2030 and earlier this year published Prosperity for All: A Low Carbon Wales, which sets out 100 policies and proposals to meet the 2020 carbon emissions targets.

Mr Skates added: “The Welsh Government’s decision to declare a climate emergency sends a clear message that we are determined to address climate change, which threatens our health, economy and infrastructure as well as our environment.

“It is important we all do what we can. We need collective action and government has a big role in making that happen, so we want to lead by example.”
Posted by llanblogger at 6:27 AM