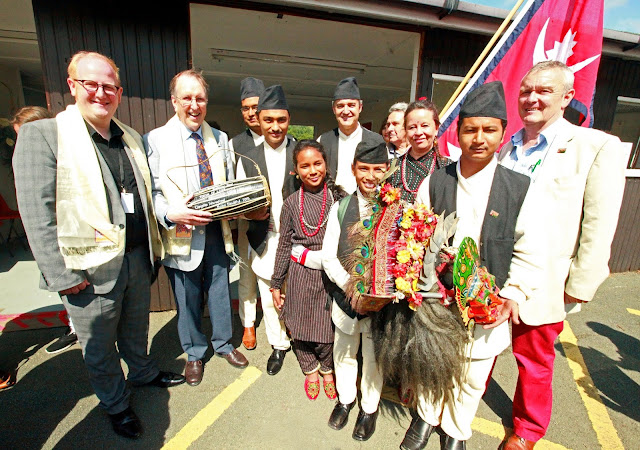 * The Nepalese group is welcomed to the eisteddfod four years ago today.
Todd Lockhead is in the centre rear of the picture wearing Nepalese costume.

The man who led a group of young Nepalese choristers on a visit to the eisteddfod back in 2015 despite their country being hit by a devastating earthquake has been back to thank some of those who made the trip possible.

New Zealander Todd Lochhead first saw the Rising Culture group perform when he was working as a teacher at the Rising English School where they were based in Bhaktapur, which is about 10 miles from the Nepalese capital of Kathmandu and around 100 miles from Mount Everest.

Four years ago he came up with a plan to bring them bring them the 5,000 miles to the UK to compete at Llangollen and a major fundraising campaign was launched.

The scheme suffered a huge setback when the region was shattered by two massive earthquakes within weeks which claimed thousands of lives and caused widespread destruction.

But, thanks to their sheer determination, a token contingent of five choir members - four boys aged 12 to their early twenties and a 12-year-old girl - were able to make their way to Llangollen in time to take centre stage on the festival’s penultimate day.

Exactly four years ago today, a reception committee including then-eisteddfod chairman Gethin Davies and musical director Eilir Owen Griffiths, along with scores of volunteers and visitors, waited at the main entrance to give a warm Welsh reception to the group at the end of their gruelling 28-hour journey to Llangollen.

Before they arrived at the gate they were serenaded by members of the Ar-Ol-Tri Male Voice Choir from Cardigan who gave them a rousing chorus of the hymn Calon Lan.

Later in the day the Nepalese, three of whom lost their homes in the first earthquake, had an equally rapturous reception when they took to the eisteddfod’s main stage to perform part of their centuries-old mask dance.

There was standing ovation from the audience which, according to eisteddfod chairman of the day Gethin Davies, was the first he had ever seen for a daytime performance.

The group repeated their dance during the evening performance featuring Choir of the World and Gareth Malone.

When they came off stage, the group were invited over to the Lions Club International stand on the field to receive a donation of £1,000 from Wrexham Lions Club which had been raising the money from a variety of events over the past four months.

This year Todd made a sentimental return trip to the eisteddfod where he called in at the stand of the Rotary organisation whose members had helped make the 2015 trip possible.

Rotarian Lizzie Clifford said: “We had a very emotional experience at Llangollen whilst volunteering on the Rotary stand.

“We met a man called Todd Lockhead who came to thank us for helping him to bring a choir from Nepal to the eisteddfod shortly after the terrible earthquake in 2015.

“There was meant to be 30 members of the group but only five members made it.

“He said Rotary had helped to fund their journey as they were left with nothing. He presented us with bags made by them including other gifts they had made.

“Todd told us he had spoken with the father of the choir members and had an update on their current situation.

“They are now thriving with one girl becoming a doctor and another opening a coffee shop.

“They said the hope and kindness they experienced at Llangollen International Musical Eisteddfod lifted them at a time when their lives were devastated. They will never forget this experience.

“So if ever there was a reason to keep going, working together to connect with others all around the world, this is it. It enriches the lives of everyone who experiences it.”