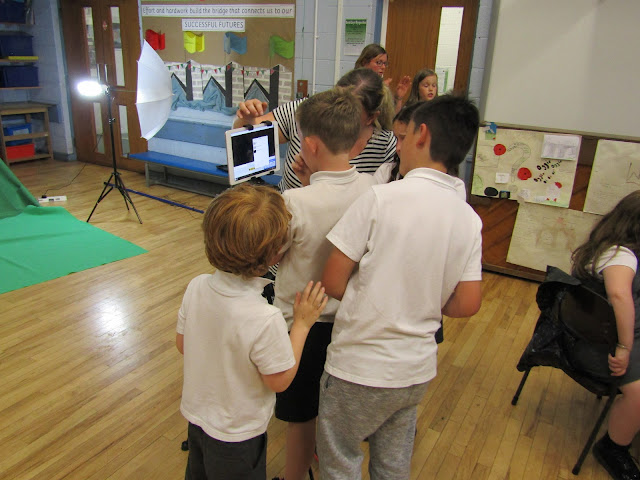 * Children gather around to learn about green screen filming.

Switched-on youngsters at a Llangollen primary school have just received a £25,000 boost to their IT skills.

The cash from three major grants will help over 180 pupils at Ysgol Bryn Collen learn much more about the amazing digital world as well as finding out about the rich history and culture of the famous town they live in.

During a special gathering at the school yesterday (Monday) evening parents and friends were able to see what the money, which came from the National Lottery Awards for All, the Area of Outstanding Natural Beauty Sustainable Development Fund and the Parent/Teacher Friends Association, is being used for.

Over the past couple of months the school has bought a wealth of new digital equipment, from laptops and iPads to a ‘green screen’ filming kit.

Headteacher Lisa Howden explained: “The entire school has been involved in our Digital Showcase project which has certainly helped us to take things to a new level.

“The various pieces of new equipment have been used to record and film various aspects of life in Llangollen, from landscape and environment to people and community.

“Local artist Ben Davis has been spending time with the children teaching them how to use the equipment and they’ve been out filming in places such as on the canal and the riverside.

“A group filmed at Plas Newydd and, using the green screen kit, superimposed images actually taken in school onto pictures of the house.

“Each class has taken a different theme. For instance, Class 5 children were looking at Llangollen in the Second World War and spoke to the nephew of a man who was evacuated from Liverpool to the town to record his story.

"Others have talked to local people, such as our town crier Chem, about their experiences of Llangollen."

Lisa added: “Most of what’s been recorded will go into a digital archive we’re creating in school but we are also hoping to transfer some of the material onto a memory stick and donate it to Llangollen Museum.

“The whole project has been marvellous not only for helping the children to improve their IT skills but also to teach them more about the town they are part of.

“It’s also enabled us to train two digital leaders for each class and they in turn will be able to teach the skills they’ve learned to the rest of their classes.” 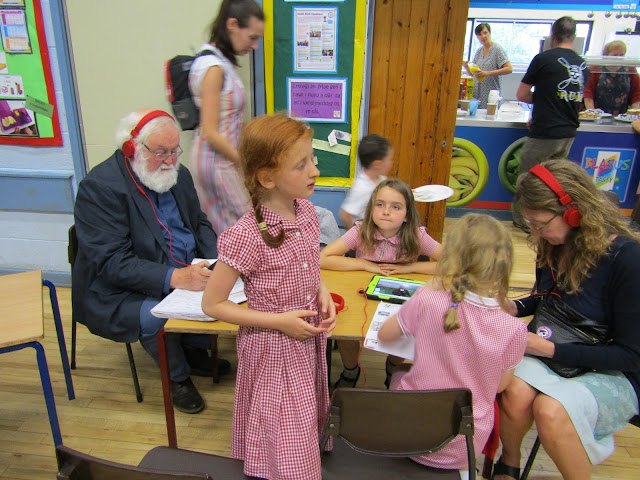 * Town crier and councillor Austin 'Chem' Cheminais
records his experiences for the project.
In the pictures below class groups are at work on various aspects of Digital Showcase. 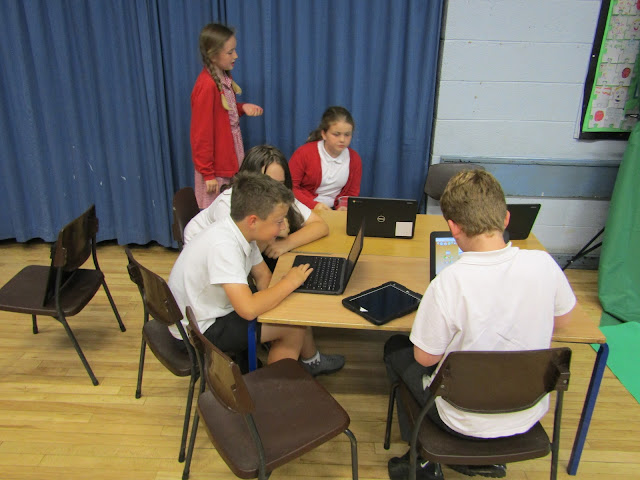 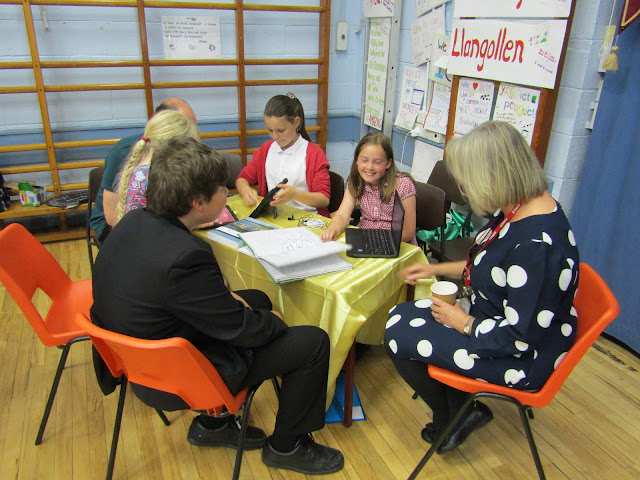 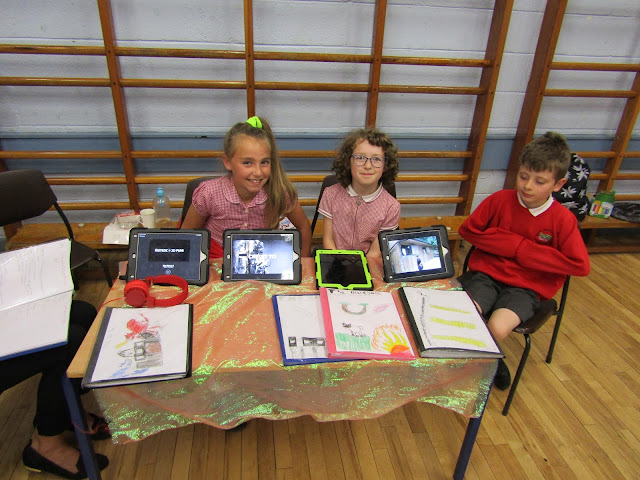 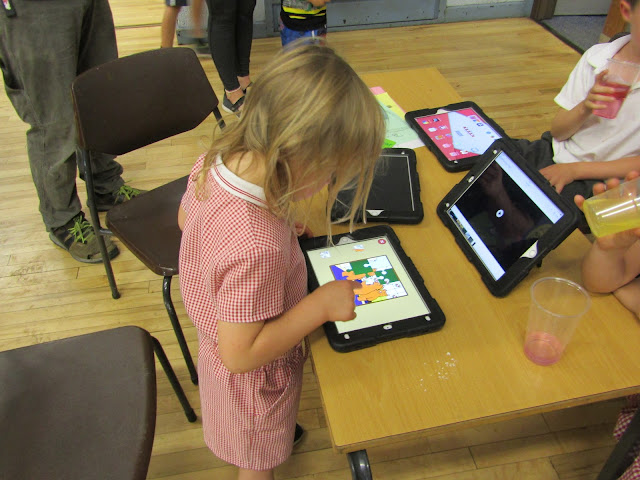 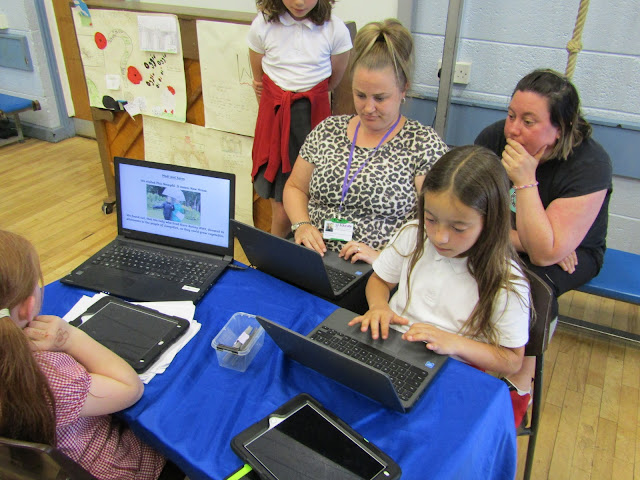 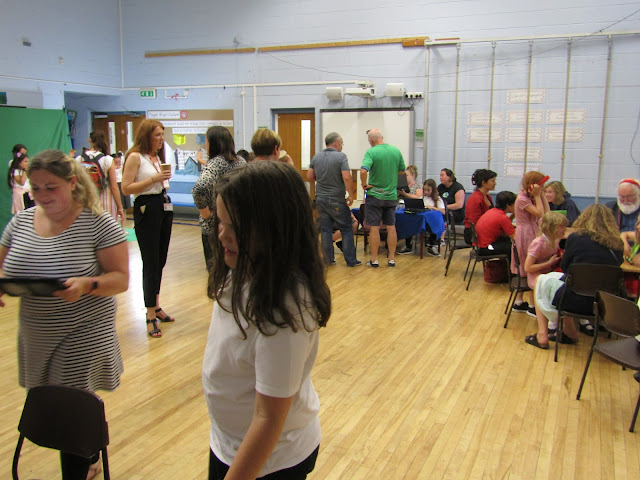 * Parents, teachers and friends gather round at the special evening.
Posted by llanblogger at 10:26 AM