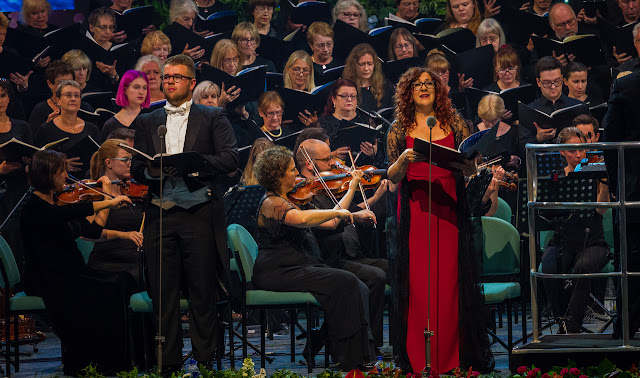 * Shân Cothi and tenor Rhodri Prys Jones during the concert.

They were accompanied by the British Sinfonietta Orchestra which also performed with international classical sensation Rolando Villazón for Tuesday night’s classical gala.

The audience were treated to two rare musical opportunities as the Eisteddfod premièred performances at the Saints and Singers concert, which included the cantata ‘Saint Teilo’ by William Mathias CBE. This was accompanied by a masquerade dance performed by Llangollen-based New Dance Company.

This was the first time Shân Cothi and Rhodri Prys Jones performed together. Their voices offered the audience an emotive and enjoyable experience as they showcased their equally impressive vocal ranges.

The evening offered the perfect opportunity to perform The Land of Song to an international audience. A powerful massed choir made up of the London Welsh Chorale, Liverpool Welsh Choral, Palmdale High School Chamber Choir and Wrexham Music Cooperative also joined the Welsh vocalists.

In memory of the Welsh tenor Kenneth Bowen, who died last year, the eisteddfod hosted the world première of The Spring of Vision, composed by the festival’s music director and friend of Bowen, Dr Edward-Rhys Harry.

The Spring of Vision encapsulates the dream of Taliesin who, on questioning the state of humanity and our future is taken on a journey through wars, conflict and then finally arriving at the one act that defines humanity, the act of Christ on the cross.

Edward-Rhys Harry said: “Wednesday is the centre of the week-long festival and I wanted Welsh music to be at the heart of this year’s Eisteddfod.”

The audience were also treated to the crowning of the Pendine International Voice of the Future, which went to Erin Rossington from Abergele.

* Tickets for this year’s festival can still be purchased online at www.llangollen.net or via the box office on 01978 862001.

Posted by llanblogger at 4:16 PM