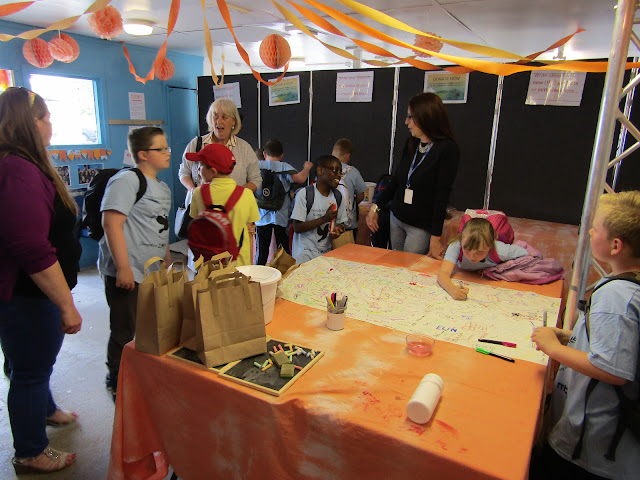 * Volunteer Charlie Jones, centre, with children from Ysgol Rhosymedre
recording their impressions of the eisteddfod on a big montage.

A dedicated band of volunteers is busy gathering memories and impressions of the festival from visitors to the eisteddfod.

They are working in the Story Hub which is appearing for the first time this year and is
located just to the left of the ticket office as you come in from the town entrance to the site.

One of the volunteers, Charlie Jones, explained: “The Story Hub has been created to record what people love about the eisteddfod, their memories of it over the years right from its early days to the present and what it means to them.

“We’re taking written notes of what they say and also working closely with fellow volunteers from Deeside Radio who plan to make a programme based on impressions they’re capturing on audio.

“So far it’s been going well and many people have been in to speak to us.

“On Monday we even had a visit from Jules Holland who was appearing in the evening concert with his Blues Band.

“Yesterday was Children’s Day so we had lots of young people in from schools across the region. They were enjoying making a record of how they felt about the eisteddfod by writing their impressions down on a big montage.”

Charlie added: “We’d like to see as many people as possible coming in to see us over the course of the week and everyone will get a warm welcome.”
Posted by llanblogger at 9:24 AM