Corwen remembers its own eisteddfod 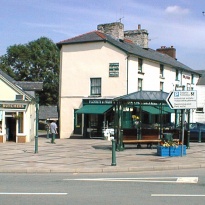 This year marks the one-hundred-year anniversary since the Peace Eisteddfod was held in Corwen in 1919.

It was a very special occasion being the first Eisteddfod following the Great War and particularly important for Corwen to be the town to host this special event.

To mark the occasion, the National Lottery funded Our Picturesque Landscape project has been working with local artists to support the community in a commemorative event.


The pupils of Ysgol Caer Drewyn have been learning about the traditions of the Eisteddfod and the actual events that took place in Corwen in 1919.

Such as how the A5 road was closed for the Eisteddfod week, there were four platforms built at Corwen train station and how the harpist, Nansi Richards, overslept and arrived late in her night dress and a large overcoat to play her harp and had to stay dressed like that for the whole hot August day!

They have also enjoyed using their imaginations to decide what happened to the 1919 Corwen National Eisteddfod Chair, the whereabouts of which is still a mystery to this day.

A commemorative community event is planned for Wednesday July 10 where a procession will be led up to the Gorsedd circle in Coed Pen y Pigyn, starting from Canolfan Ni at 1pm.

Everyone is welcome to join the procession and remember the 1919 Corwen National Eisteddfod together.

For the procession the children at Ysgol Caer Drewyn, and some of their parents, have been creating giant Druid puppets.

The children in key stage two have formed a percussion band to create a celebratory atmosphere for the procession and they have developed drama performances based on the actual happenings at the Eisteddfod in 1919, which will be performed in the Gorsedd at Pen Y Pigyn.

The local community have also been involved. On Thursdays at Canolfan Ni the Vale of Clwyd MIND group and the lunch club together with the nursery school children have been using printing techniques to create banners and flags to decorate the procession.

The event is also being filmed to share with people who cannot be there and for the future, to remind people in 100 years’ time how Corwen celebrated this important centenary.

Following the event in July, members of the community who have been involved in the project will be taking the Druid puppets to this year’s National Eisteddfod in Llanrwst to remind people of the anniversary of the 1919 National Peace Eisteddfod and encourage people to come and visit Corwen.

Sallyanne Hall, Community Engagement Officer for Our Picturesque Landscape “I am really looking forward to the procession, it has been wonderful to see people of all ages and backgrounds working together to remember and celebrate this important anniversary, the inter-generational activities in making the decorations and hearing the stories of people’s own memories of Eisteddfods from their childhoods has been particularly special.”

Richard Bellamy, Director of the National Lottery Heritage Fund, Wales, said: “We are enthusiastic about giving young people the chance to learn about heritage. Thanks to National Lottery players our funding helps them to work with others in their community bringing fresh ideas and energy to the task.  The Corwen Eisteddfod Procession is an excellent example of how they can get involved, develop new skills and interests, connect with their communities and have fun.”
Posted by llanblogger at 6:49 AM