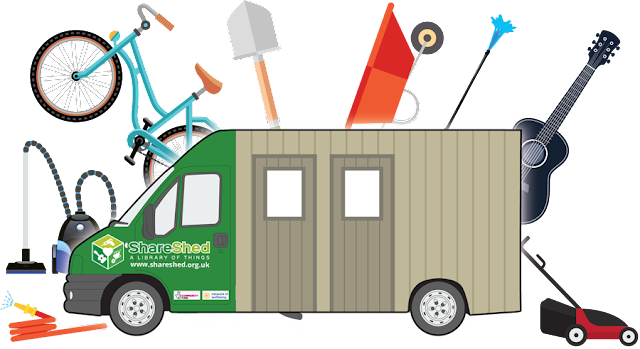 Llangollen Town Council has led a three-town submission to the Welsh Government for funding to support a mobile Library of Things.

The idea is for an electric van that would travel between Llangollen, Mold and Ruthin offering households the chance to borrow rarely used household and garden equipment, rather than needing to buy it.

The application for funding falls under the Circular Economy Strategy that was launched in Llangollen last year in recognition of the town’s commitments to a sustainable future through its Cittaslow status and Plastic Free Town award.

The Library of Things would contain items such as pressure washers, lawnmowers, electric drills, tents, strimmers, ladders, travel cots, a projector and more.

It is also hoped it could include new technology items that would help promote a circular economy such as plastic recycling granulators and possibly a 3D printer so interested residents in the three towns can build expertise using such items.

If the Welsh Government funding is approved and matched funds are secured, the aim is for the project to help Llangollen households reduce spending on rarely-used items, try equipment for new hobbies or sports before purchase, and build valuable skills for the 21st century economy.

It also hopes to link with repair cafes operating or being developed in each town, loaning tools to trainee “fixperts” to help repair and reuse broken equipment.

The Library of Things idea was initially raised with the Town Council during the Cittaslow Networking events last year, attended by over 50 town groups, and is said to have seemed a good fit when the Welsh Government funding was announced.

Making the library mobile and sharing it across the three towns is said to reduce overheads such as rent and rates, maximises items available and hopefully supports a growing network of “fixperts” across the region.

The idea builds on a similar approach piloted in Devon and represents an opportunity for Llangollen to show further leadership in the Circular Economy by piloting the idea for Wales,p according to Councillor Robyn Lovelock, chair of the Cittaslow Committee of the Town Council.

She said:  “The project is clearly in line with our Cittaslow status, which aims for a more sustainable future, by reducing the need for people to buy items they could instead borrow, saving money and storage space in their homes – as well as reducing the environmental impact of making and transporting those items.”

Cllr Lovelock says she will work over the coming months with Llangollen Town Council and local community groups to submit matched funding applications to ensure the project can proceed if offered the capital funds by Welsh Government.

Warren Davies, co-ordinator of Friends of the Earth Llangollen, said: “The scheme will overcome some of the barriers faced by our group when looking to continue our very popular repair cafe events.

"The localbenefits to sharing and repairing are significant [with] increased resilience through skill sharing, less reliance on imported goods and financial savings through not needing to buy new items."

Heulwen Wright, chair of Friends of Pengwern, said: "The group would be happy to consider hosting the van at Pengwern Community Centre in the future.

"The idea could work well alongside our plans for a community workshop at the Pengwern Centre."

Tara Dumas, waste and recycling officer for Denbighshire County Council, said: “This is exactly the type of initiative that will help to reduce waste through increasing reuse-the first two steps in the waste hierarchy.

"It will also support in getting people to think differently about their consumption and purchasing habits.

"Denbighshire County Council endorse the application and can confirm it is complementary with our current waste strategy goals and objectives.”

Llangollen Town Council will hear in October if it has been successful in its application.

Cllr Lovelock said the cost to the town council hasn’t been decided yet as discussions are on-going with the county council and other town councils.

In the meantime, the Cittaslow Committee are asking for ideas of items people would like to see available for hire and also for people interested in donating items to get in touch.