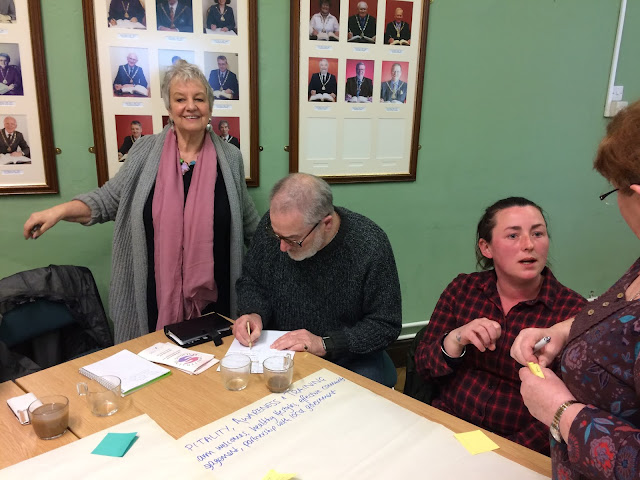 * Discussions between groups at the Cittaslow meeting.

Over 25 town clubs and organisations attended a recent series of networking meetings organised by the Cittaslow Committee of the Town Council.

The three meetings were based around Cittaslow principles and brought together groups involved in environment, food & farming, tourism, culture and heritage; and community and social inclusion.

The purpose of the meetings was to bring like-minded groups together to explore the potential for strengthening links and communication between them, and to test interest in Cittaslow Llangollen providing a role as an “umbrella organisation” for groups in the town and valley.

"It was fantastic to hear the buzz in the room as the various groups got talking with each other.

“We are still in the early stages of working out what might be feasible and sustainable ways of working together, but it is great to have got the conversations started.”

Councillor Melvyn Mile, a member of the Cittaslow Committee and also a county councillor, said: "I was impressed by the turnout across all three sessions. The process of inviting all the different groups, societies, charities and other interested parties together and getting them talking to each other has been a major achievement. Let's look to build on this momentum and look at what can be achieved by working together."

The Cittaslow Committee says it will look at the ideas discussed in the sessions over the coming weeks and propose some ideas to the groups on how greater collaboration might work in practice.

Llangollen became a designated Cittaslow town in 2013 after a substantial effort from a large group of councillors and local volunteers to secure the designation, and has remained a member of the international network.

Cittaslow promotes a way of life for market towns that is environmentally sustainable and supportive of local community groups and businesses.