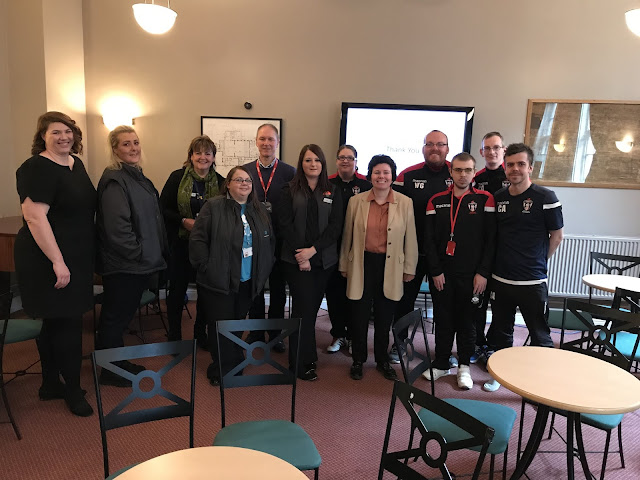 * Susan Elan Jones MP with Co-op Group staff and representatives of the Stiwt Theatre and Wrexham Inclusion FC at the Stiwt, Rhos.

The MP also heard about the Co-op's nationwide programmes to tackle crime, loneliness and the evils of modern slavery.

She said: "There's a really strong Co-operative tradition in our local area. Like many people around here, I shop regularly at the Co-op and I'm a Co-op member too.

"I think it's great to see how the Co-op invests in our local community. From funding to restore the Stiwt clock to its former glory to support for the remarkable Wrexham Inclusion FC to grants to help the new Brymbo Heritage Orchard project, the Co-op is doing so much to promote real grassroots community action."

Michael Gallagher, area manager for the Co-op, said: “We were delighted to welcome Susan Elan Jones MP to our store.

"The Co-op operates at the heart of local life and it is a special year this year as the Co-op marks its 175th anniversary.

"At heart. the Co-op is about connecting communities, bringing people together and making a difference. We believe co-operation is as relevant today as it has ever been, and the Co-op is committed to creating and sharing value in the communities which it serves, while tackling the issues which its members and customers care about."

Under the Co-op's membership scheme, members receive a 5% reward when buying own brand products and the Co-op donates a further 1% to local causes.