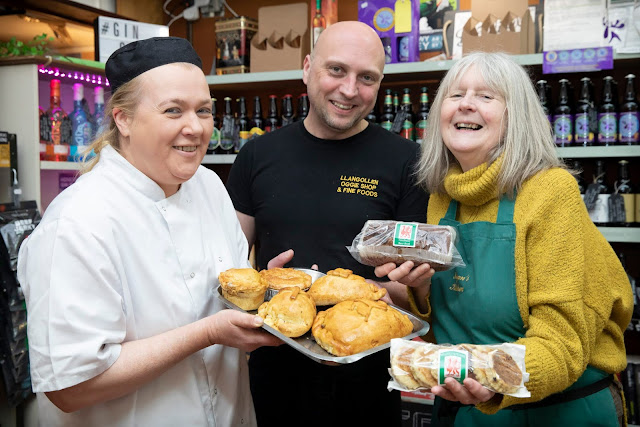 It’s oggie, oggie, oggie for a former financial services specialist who has swapped the world of insurance for sausage rolls and pastries – by running a pie shop and delicatessen.
And the big seller for Ross Anderson and his wife Tracey, who are celebrating five years at the Llangollen Oggie Shop and Deli on the town’s High Street, is the traditional Welsh delicacy that’s believed to outdate the Cornish pasty.
They can sell hundreds in a day at the height of the summer season when tourists flock to the town.
Since opening Ross, from Llangollen, has seen the business almost double its turnover and he bases its success on a commitment to local produce and the oggie, made by local baker Pauline Jones, is just one example.
Legend has it the oggie was first served to the 12th century builders of St David’s Cathedral in Pembrokeshire – 600 years before the pasty appeared – but Ross gets his fresh every day from Pauline.
He said: “I was a financial services broker for 20 years but it was very stressful and I fancied a change and when this opportunity came up I took it and it’s been very positive.
“Ironically my very first job was in the food sector - as a fish fryer at Harry Ramsden’s in Manchester and I stayed there for two years and Tracey’s parents had kept a couple of pubs in Llangollen, The Grapes and the Prince of Wales.
“It’s been a good move to open the Oggie Shop but it has been a learning curve as well.
“Our shop was originally an open market site underneath the town hall assembly rooms when they were built in 1867, becoming a shop in 1885 and since then it’s been a grocer’s so we’re continuing a tradition and from the start we’ve decided to stock as much local produce as possible.
“As well as Pauline’s oggies we have other pies and pastries while the Welsh cakes and bara brith are made across the road at Megan’s Kitchen as well as other pastries and pies and we stock other Denbighshire products such as Chilly Cow ice cream from the Vale of Clwyd.” 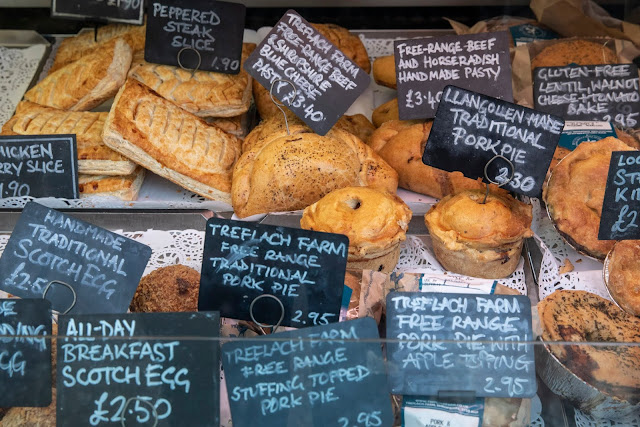 The Llangollen Oggie Shop’s commitment to locally-sourced products has worked well for them and is the kind of unique shopping offer that has seen them featured in Denbighshire County Council’s #lovelivelocal campaign which promotes the lively and high quality food and drink offer on the county’s high streets.
This is being featured on a series of videos on social media in the run-up to Easter as the campaign highlights what the county has to offer shoppers and encourages people to support local independent businesses by using the hashtag on Twitter and Facebook to share good experiences they’ve had as well as promote products and services locally they have ‘loved’.
Ross now employs Tracey and one other full-time staffer along with four part-timers and he said: “In the quiet months we can run the shop with just a couple of us but we scale up in the summer and basically we will stay open as long as there are people about.
“I had never really thought about being in the food business but I came across the fact that the shop, known as Bailey’s Delicatessen, was for sale in a commercial agency and I knew it and felt it had a lot of potential and the location was really good.
“Food is a happy business and I wanted to get the shop attached to the town and the community and establish it as a Llangollen entity. I’m a big believer in presenting yourself well and we aim to establish a rapport with the customer so that they return.
“The five years have just passed so quickly and we have doubled turnover. On a good day in the summer we can take 30 times more than we might on a rotten January day but in the recent spell of warm February weather we took a record amount for an off-season weekend due to such a high level of visitors to the town.
“It can mean some long days but I do feel I’m still in the honeymoon stage - even after five years it hasn’t worn off yet.
“We do get lots of local customers and we do try and look after them and we gets lots of outdoor sports enthusiasts because Llangollen is something of a mecca for them.
“And we’re always on the look out for new products sourced locally and luckily there seen to be more and more becoming available and we believe it’s great for visitors to experience a taste of the area they are visiting and maybe take some home with them as well.
“Llangollen is a great and thriving place for a food and drink business. We hold a celebrated Food festival every October at the international pavilion site, which is currently listed in The Telegraph’s top 10 UK food events.
“I can be found there running around organising the music stages over that weekend.
“The town itself boasts real quality restaurant offerings showcasing local produce, like The Corn Mill and The Three Eagles. And alongside ourselves we have great specialist food shops promoting local produce like Porters Delicatessen, Zingiber and The Phoenix.”
* Denbighshire County Council’s #LoveLiveLocal 2019 campaign to promote the county’s rich and varied food and drink offer uses the hashtag #LoveLiveLocal across all social networking platforms to encourage shoppers to visit its towns.
* For more on #lovelivelocal go to as well as on Facebook and Twitter.
Posted by llanblogger at 6:39 AM