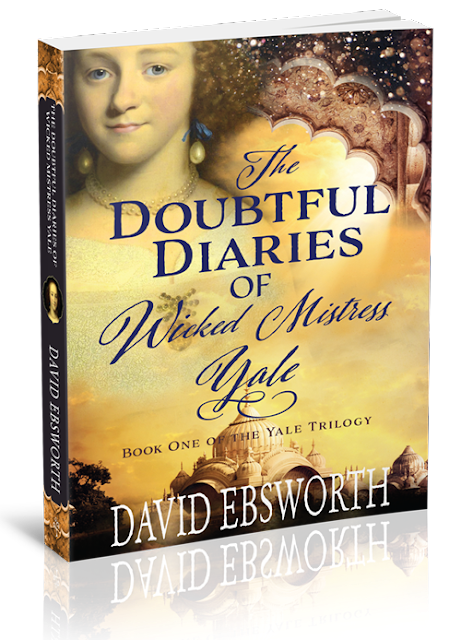 Whether she was or was not will never be established either way as there are no precise historical records to tell us.

For although she is referred to as such in her famous husband's will, he adds nothing to back up his scathing description of his spouse.

So her character must remain a tantalising matter for conjecture and it is precisely this conjecture which forms the foundation for a fascinating new novel by local author David Ebsworth.

He already has a formidable reputation as the spinner of compelling historical fiction on topics such  as the Zulu and Spanish Civil wars.

The Doubtful Diaries of the Wicked Mistress Yale is his seventh novel and is woven around the few facts that are known about the lady's early adult years as the wife of an East India Company official in Madras in the final decades of the 17th century.

Her action-packed story is told through the diaries which the author painstakingly constructs for her.

During this tumultuous period of empire she undergoes everything from the shattering loss of her first husband and two young children to disease right through to an attack by bloodthirsty pirates.

Her later marriage to Yale, a man she actively despises according to the author, comes out of the necessity for a woman left alone with small children in a far-away country to find a protector and provider, two roles for which the man who was eventually to be buried in St Giles' churchyard is perfectly qualified as a rising star of the company.

Many intrigues and plot twists ensue and all are presented in immaculate style by Ebsworth whose evocation of the era, right down to its flowery language, and the overheated, exotic atmosphere of
India is faultless.

As the story comes to a close we find Catherine sailing back home to England after a couple of misdemeanours of her own.

Whether so far she has been worthy of the wickedness ascribed to her by Yale is for the reader to decide.

But if they need further evidence of her character they can catch up with Catherine in the second part of the trilogy which Ebsworth has already started to create and is teased in this book.

* There are a number of buying to explore at: http://www.davidebsworth.com/doubtful-diaries-wicked-mistress-yale
Posted by llanblogger at 6:39 AM