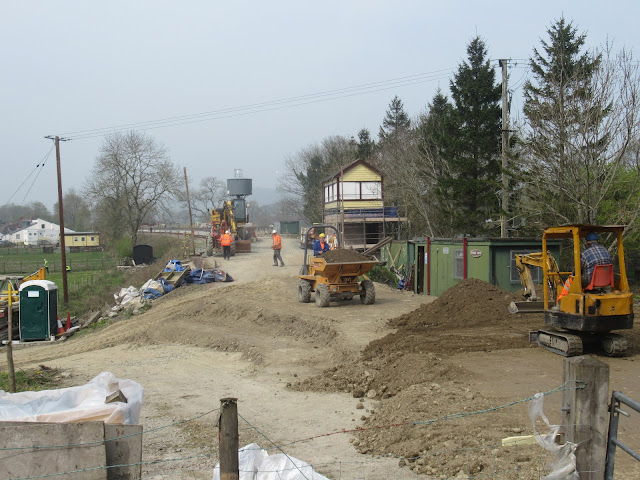 * The work in progress looking across the area towards Corwen.

In the course of a four-day exercise beginning on April 15, a team of Llangollen Railway's Corwen Project volunteers helped local contractor Arwel Dolben with infilling the gap in the railway embankment.

This has long been seen as the major obstruction in completing the railway line through to the new Corwen terminus.

Many tonnes of infill material have been recovered from the old Ruthin branch embankment and brought round by the dumper loads to the site of the gap.

The infill has required careful layering and rolling to provide a firm base as the level was brought up by 10 feet in places across the width of the former trackbed.

At the end on the first phase of the exercise project manager Richard Dixon-Gough said:
" May I, on behalf of the project team and Llangollen Railway, express my thanks and gratitude to all who have worked so hard over some long days and taken on the physical effort to achieve so much this week.
"With the support of our contractors we have literally moved mountains and the first phase of the exercise has been virtually completed. Without the input from everyone involved this would not have happened."

The cost of the exercise was met through the Infill the Gap appeal for donations which has raised over £10,000 from supporters and well wishers, with £500 coming from a charity raffle organised by Corwen townsfolk.

Completion of the final phase of the project will continue after Easter. When complete new track will be laid to connect the existing railhead with the loop line in the platform area.
Posted by llanblogger at 6:59 AM