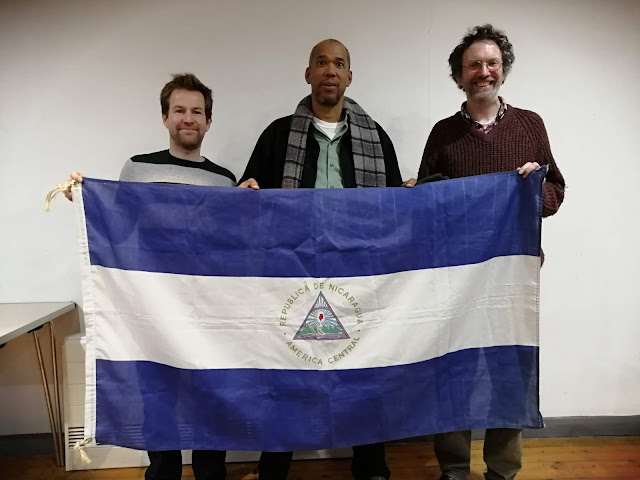 * David McKnight of Llangollen, who organised the event,
with Johnny Hodgson and Ben Gregory.

Llangollen is renowned for welcoming the world to these shores, and the town once again proved to be an international diplomatic hub as it hosted a highly respected former Nicaraguan government official.

Johnny Hodgson, who was appointed chairman of the Bluefields Commission on the Caribbean coast of Nicaragua and is a former elected official in his region, was a guest speaker at a Wales Nicaragua Solidarity Campaign event in the town.

Thirty years after his first visit to Wales Johnny revisited the country to talk about how life had improved on the Nicaraguan Caribbean Coast over the last decade, and the impact of last year's violence on his country.

The Nicaraguan Caribbean Coast is a multicultural and multilingual region with its own autonomous government. Johnny drew comparisons between his region of Nicaragua and Wales.

Ben Gregory of the Wales Nicaragua Solidarity Campaign said: "We were extremely glad to welcome Johnny back to Wales. This is his fifth visit to Wales over the last 30 years.

"He talked about the things that have changed recently - investment in infrastructure, with new roads, and electricity and water being provided to a greater number of people. But he also talked about the challenge posed by reconciliation after last years violence."

* Anybody interested in the Wales-Nicaragua Solidarity Campaign can find more information at http://www.nicaraguasc.org.uk
Posted by llanblogger at 7:40 AM