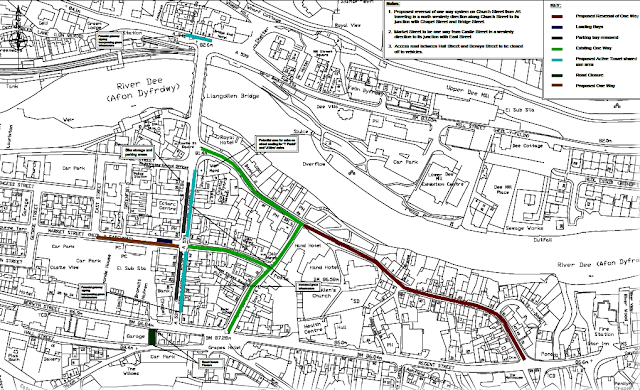 * The county council's plan for changes to be made in the town centre.

The council had successfully bid for Welsh Government funds to introduce local sustainable transport measures in response to covid-19.

The funding will be used to promote walking and cycling, to facilitate social distancing measures, to encourage businesses to expand their offer outside their premises and to support residents and visitors to feel safe in four of the county's town centres.

Following consultation, the proposals for Llangollen have now been given the go-ahead, as revealed yesterday evening by llanblogger.

Giving further details of what will happen, Cllr Timms said this will mean:

The creation of more space for social distancing by widening the pavements along Castle Street and on Abbey Road at the junction with Castle Street by the removal of parking and the use of ‘lane defenders’ to create safe areas for pedestrians and cyclists.

This, said Cllr Timms, change will relieve congestion on Castle Street and the ‘one way’ section of Market Street will also allow the creation of a loading bay to serve nearby businesses on Castle Street.

•          Reversing the direction of flow of vehicles on Church Street

•          Support cafes, pubs and restaurants to introduce outside seating will make the town centre more welcoming
The changes will be made by a temporary traffic order for up to 18 months and the effect of the changes will be closely monitored by the council as they are introduced.

Cllr Timms said: "The results of the formal consultation showed huge support for the introduction of these measures.

"It has been clear to residents over the last few weeks that social distancing in the town has been almost impossible to achieve.

"The narrow pavements and the huge increase in the number of visitors since the lockdown ended has created a very difficult situation. Many residents have avoided the town centre because they do not feel safe on crowded streets in the middle of the day.

“Both Cllr Melvyn Mile and I were strongly in favour of the introduction of these measures. We believe that they are essential to enable residents and visitors to feel safe in the town centre.

“It is encouraging to see that visitors are keen to return to Llangollen, But it is also vital that we do everything we can to make the town as safe as possible for everyone; residents and visitors alike.

“Denbighshire’s formal consultation through the County Conversation website gave a huge ‘thumbs-up’ for the proposals with nearly 83% of those that responded‘strongly agreeing’ and a further 12% ‘somewhat agreeing’ with the proposals. Only 5% of the replies were negative."

He added: “Over the last few weeks queueing outside small shops has been a problem, leaving no space for those walking down the street to keep their distance. It will be much easier to maintain social distancing in the town when wider pavements are created.

“The reversal of the one-way traffic flow on Church Street should result in a significant change in the number of vehicles using this route as a 'short cut', particularly at the times just before and just after the school day. This will lead to a much safer route to school for children and their parents who walk and cycle to and from school along this very narrow road.

“The closure of the road between Berwyn Street and Hall Street that passes between Stan’s garage and the M’eating Place will help to make this area safer for pedestrians, cyclists and motorists.

“Some businesses expressed their concerns over the loss of ‘pop and shop’ parking and the lack of loading bays by signing a ‘template’ letter which was sent to the council separately. I believe that it is important to address these important concerns.

"The ‘loading bay’ issue has been addressed by providing a bay on the Market Street and Castle Street junction. On the provision of short stay parking, Mel Mile and I have been pressing the council to give free parking in all car parks for 30 minutes to allow ‘pop and shop’ visits for those on the outskirts of the town.

"The county responded with two hours free parking in East Street Car Park. Other towns in Denbighshire will also get a similar concessions.

"We don’t think that this meets the needs of Llangollen and so we will continue to press the case for a ‘free half-hour’ in all our car parks to encourage local shopping in the town centre.

“It is vitally important that local residents and businesses pull together to create a town centre that is vibrant and safe for everyone in these very difficult times."
Posted by llanblogger at 6:56 AM