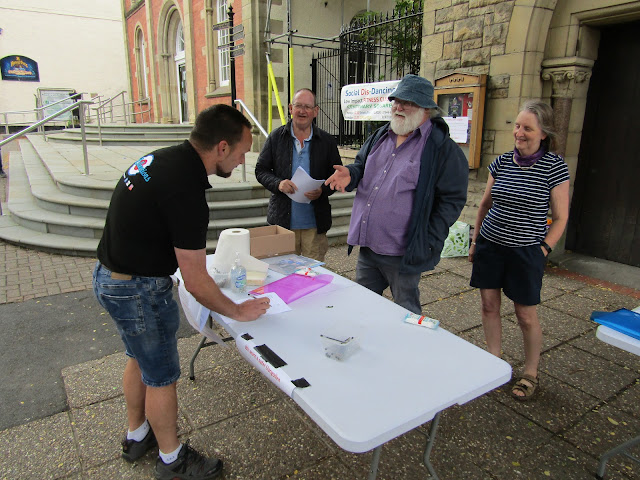 * From left, a member of the public discusses the letter with Cllrs Melvyn Mile and Austin Cheminais and his wife, Jane Cheminais.

Two Llangollen town councillors have been out in the town centre encouraging people to urge Denbighshire’s leaders to urgently put in place social distancing measures along Castle Street to protect them from the threat of Covid-19 infection.

Austin Cheminais and Melvyn Mile, who is also a local county councillor, were outside the town hall this morning putting their case that the lack of steps to keep people properly apart on the main street - including the controversial temporary closure of parking bays - during the pandemic is putting the lives of residents and visitors at risk.

And they were asking people who agreed with them to sign a pre-printed letter addressed to county chief executive Judith Greenhalgh and Cllr Brian Jones, lead member for waste, transport and the environment, calling for measures to be put in place.

“As a councillor I can’t comprehend why it is going to be as late as mid-September before the work to make Llangollen safer is completed.

“We want to try and give the silent majority a voice.

“People around the UK are dying and I don’t believe that the risk is being taken seriously enough by Denbighshire. Something needs to happen now!

“I have family working on the front line and I know how dangerous the coronavirus is. I know people who have died.

“Some residents have told councillors that they are afraid to come into town.

“Those people who have opposed the widening of the pathways I believe are putting people’s lives at risk and are irresponsible.”

The statement adds: “I have taken lockdown pretty seriously since March but I’m in town now because this is too important to ignore.

“It’s hard to fathom why Denbighshire feels the need to consult rather than just taking the necessary steps to make Llangollen a safer place to be.”

The letter to the county chiefs which the two councillors were inviting people to sign says: “As a resident of Llangollen I fully support and endorse the plan to suspend parking in Castle Street and widen pavements to allow social distancing and provide a safer Covid 19 environment.

“Up to now the council has failed to undertake any work in Llangollen town centre to improve safety during the pandemic in what is a very busy tourist town at its busiest time of the year.  The narrow pavements prevent any form of social distancing and are putting the health, welfare and lives of both residents and visitors at risk.

“The importance of social distancing to prevent the spread of coronavirus has been emphasised repeatedly by scientists and the Government. Social distancing in Llangollen is impossible! The sooner the plan to modify the town centre and make it safe is completed the better.”

Cllr Cheminais said in the first half-hour of them being outside the town hall around 15 people had agreed to sign the letter.

He added that they plan to be back in the same place tomorrow and Wednesday mornings.
Posted by llanblogger at 11:15 AM