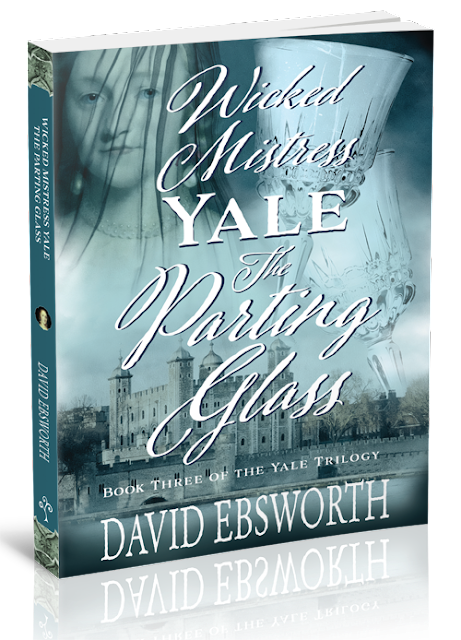 * The Parting Glass by David Ebsworth.

A writer's latest and ninth novel features scenes set in Wrexham in 1715 and 1721.

It's the third part of his Yale Trilogy, which tells the story of local celebrity, Elihu Yale, but told through the eyes of his wife, Catherine.

His work has won praise from other historical fiction authors, like Barbara Erskine (The Ghost Tree and Lady of Hay), who says that the trilogy is "brilliantly researched, packed with fascinating detail, a wonderful evocation of the period."

David Ebsworth said: "I'm a great fan of Barbara Erskine too, and it was fabulous that she enjoyed it so much.

"I loved writing this trilogy. I guess everybody knows at least a bit about Elihu Yale. Most famously, of course, he gave his name to Yale University, and had a reputation as a philanthropist and collector.

"But he'd also been a governor for the East India Company and, in that capacity, he'd overseen the trade in slaves from India during the 1680s.

"He'd married Catherine, the widow of another Company official, and when he died in 1721 he left her only the words 'To my wicked wife...' and nothing else, no bequest, not a penny."

The first part of the trilogy, also highly acclaimed, tells the story of Catherine's first marriage and her life at old Madras, the death of her husband, her marriage to Elihu, the intrigue and perils at this early East India Company outpost.

The second sees her back in London, alone except for her seven children, and embroiled in the aftermath of the Glorious Revolution.

"But this third part," said David, "tells how Elihu Yale returns home too, somewhat in disgrace, determined to break Catherine's independence, and living mainly at the home he'd inherited here in Wrexham, at Plas Grono, now part of the Erddig Estate.

"So it gave me an excuse to also tell the story of the Wrexham riots in 1715 - again, from Catherine's viewpoint since, in the novels, she also acts as a government spy. These were part of the Church-and-King riots in which High Church Anglicans viciously attacked Dissenters like the Quakers, Baptists and Presbyterians. It was great fun recreating Wrexham as it might have looked in 1715."

David also enjoyed bringing Catherine back to Wrexham for the novel's finale, Elihu Yale's burial in 1721 - in the churchyard at St Giles Church where, of course, his tomb can still be seen. But it's a finale with lots of twists, at last the reason revealed for Yale branding her a 'wicked wife.' So, no spoilers here.

* Wicked Mistress Yale, The Parting Glass is published by SilverWood Books and is available through all good bookstores, including Waterstones, or through Amazon - and through your local library.

Part One of the trilogy is The Doubtful Diaries of Wicked Mistress Yale, and Part Two is Mistress Yale's Diaries, The Glorious Return.

David Ebsworth is the pen name of Liverpool-born Dave McCall, who has lived in Acton, Wrexham, since 1981 and is heavily involved in Wrexham's own literary festival, the Carnival of Words.
Posted by llanblogger at 6:33 AM