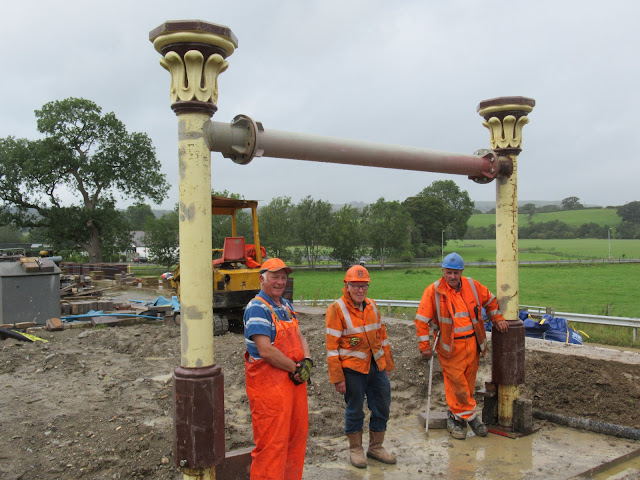 Volunteers at the Corwen Railway Development Project are celebrating the successful completion of work to install a series of historic canopy columns at the site of the new station.

The large metal structures have been brought 200 miles to north Wales from London where they were originally part of Blackfriars station.

The installation of the final pair of columns was completed last weekend after the work was delayed by the advent of Covid-19.

A substantial foundation was required to secure their installation against the prospect of high winds on the exposed site and the work to excavate a trench on the platform ready for delivery of a load of ready-mix was restarted after lockdown was lifted.

With the slab of concrete in place, the two columns were lifted onto their anchor points and bolted down with the cross piece.

Their acquisition, renovation, re-engineering and installation has been an epic tale of volunteer time and effort over the past four years, coupled with the financing of the task.

Eight are now in-situ on the platform, with six around the stairwell and the final pair forming the eastern end of the canopy support, in-between which a station building will provide the integral roofing link.

Seen from the town's car park, they make an impressive sight on the elevated platform as a further statement the project is nearing completion.

Project Manager Richard Dixon-Gough said. “The project team members are delighted to see the columns in place after many hours of site preparation, a process interrupted by the pandemic.

"The canopy will be subjected to significant wind forces at this elevated, exposed station location and called for a substantial foundation to secure the columns.

"As now erected, the columns are another notable achievement by the volunteers engaged in working towards completion of the station.” 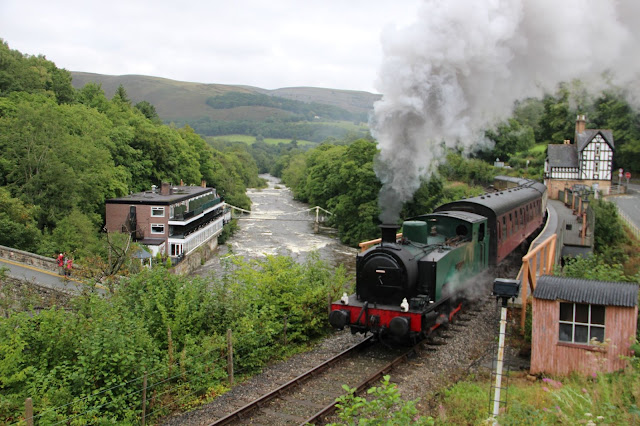 There was a change of engine on the Llangollen line yesterday (Thursday).

A tank engine named 'Jennifer' was hauling the passenger trains.

The engine normally works on other shorter heritage railways when out on hire.
Posted by llanblogger at 10:07 AM