SEE UPDATE AT FOOT OF STORY 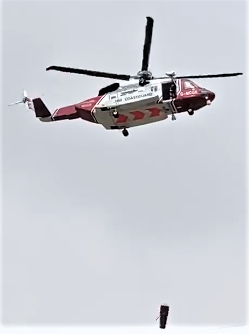 More than one helicopter is thought to have was involved in the rescue of what is believed to have been a walker from the Panorama near Sun Bank earlier today.

This picture is taken from a short video film posted on Facebook by local dance instructor Julie Kirk Thomas who lives nearby.

Julie, who runs the weekly Strictly Fun Dancing sessions in Centenary Square at 10.30am on Mondays, told llanblogger: "It's been very busy here with helicopters and I was filming from our garden.

"We noticed climbers on the old quarry behind us this morning whilst dog walking.

"It all went quiet just after 3pm today."


"A woman has been flown to hospital after falling at a former quarry now used by climbers.
"Emergency services were called to the Trevor Quarry site at Panorama Walk near Llangollen just after 12.30pm on Saturday after reports that a woman had fallen.


"The Wales Air Ambulance and coastguard helicopter were both required to attend."
Posted by llanblogger at 3:25 PM