* The dazzling stage line-up for the Wizard of Oz. All pictures by BARRIE POTTER

A riot of colour and talent fills the Town Hall stage as the Young ‘Uns present their 30th anniversary production of the Wizard of Oz this week.

This is the second time that the Llangollen Operatic Society’s junior section have danced down the Yellow Brick Road, the first occasion being when they chose this as their inaugural big show in 1991.

Unfortunately, I wasn’t around to see how they staged it back then but I can say for sure that this one, which runs from tomorrow (Thursday) until Saturday, is by far their most colourful  to date as it shines likes a beacon of warmth and joy through a murky winter’s night.

Thanks to some backstage wizardry every scene – from the farmlands of young heroine Dorothy Gale’s Kansas farm to Munchkinland and the Emerald City – is brilliantly lit in an array of dazzling hues which perfectly set off the shades of the inventive costumes and backdrops.

And, after all, that’s what this piece of phantasmagoria is all about as we accompany Dorothy on her journey through the crazy landscapes of her dreams.

It’s not just the magnificent settings that stand out because the kids in the huge cast also bedazzle with their performances.

Grace Roberts is a sympathetic Dorothy interpreting her considerable part with precision and flair.
She receives some memorable backing from all the key characters.

Katie Clark as the Wicked Witch of West is at times so scary that she even puts the wind up the audience. Her performance is enhanced by her incredible costume and the atmospheric green aura cast around her by those brilliant lighting people.

Ethan Roberts makes a stunning and perfectly believable Wizard of Oz while some memorable portrayals come from Ethan Le Cheminant as the Tinman without a heart, Matthew Humphreys as the Scarecrow who is minus a brain and Aled Morris as the Cowardly Lion.

They all put their heart, souls and plenty of guts into it.

Connie Richardson shines as Glinda the Good Witch of the North while Bea Lermite as a splendid Mayoress of Munchkinlnand.

Naturally, Dorothy needs her faithful dog at her side throughout her adventure and little Florence Catley is just great as Toto.

Wizard of Oz is of course set in the good old US of A and what’s particularly striking is how all those with speaking parts manage to retain a high quality Stateside accent throughout. And that’s something which isn’t always the case with this show.

Dancing around the key characters and adding to the way that Technicolor has been brought so marvellously to the Llangollen stage is a small army of lively and well disciplined youngsters in the chorus who get through a whole wardrobe of magnificent costumes during the show.

Behind the scenes is a production team led by producer Pam Williams and including assistant producer Dee Smith and co-directors Robin Crowley and Jo Lloyd, who should all be proud of this show.

On the whole it’s a wizard of a performance completely worthy of the Young ‘Uns’ landmark anniversary.

Evening performances begin at 7.30pm and there is a Saturday matinee at 2pm.

* Tickets are £12 with £10 concessions. They are available locally from Gwyn the Butchers, Jades Hair and Beauty, Llangollen Oggie Shop and Stella Bond on 01978 860441. 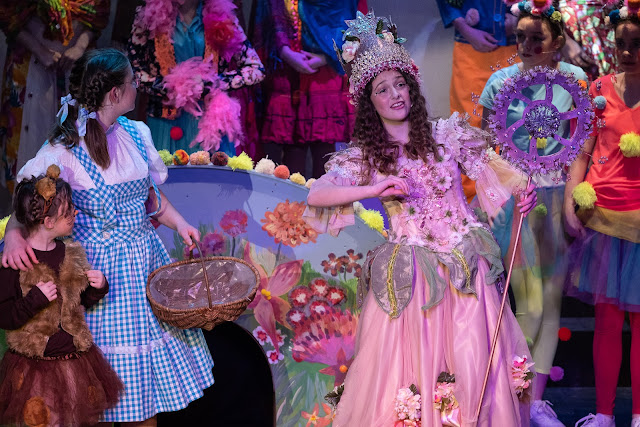 * Connie Richardson shines as Glinda the Good Witch of the North. 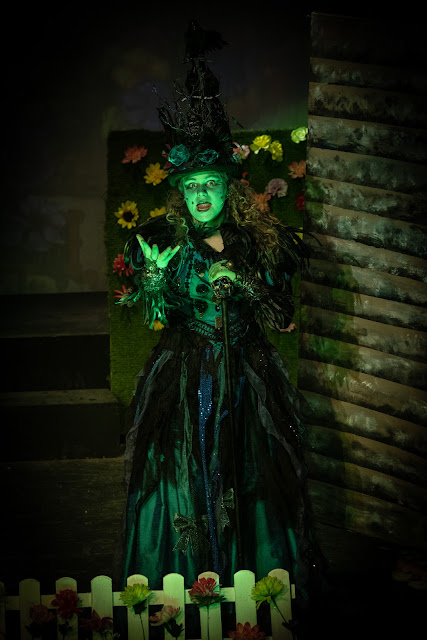 * Katie Clark is a scary the Wicked Witch of West. 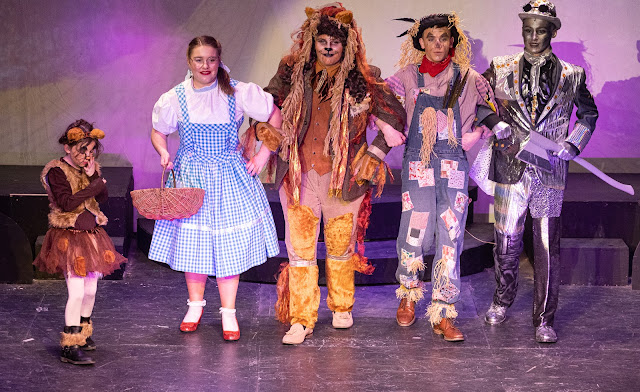 * Off to see the wizard are, from left, Florence Catley as Totot the dog, Grace Roberts as Dorothy, Aled Morris as the Cowardly Lion, Matthew Humphreys as the Scarecrow and Ethan Le Cheminant as the Tinman. 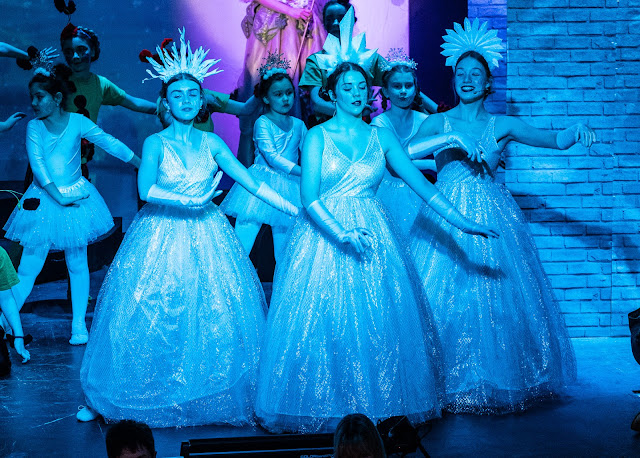 * An atmospheric group of dancers on the chorus line.
Posted by llanblogger at 6:45 AM