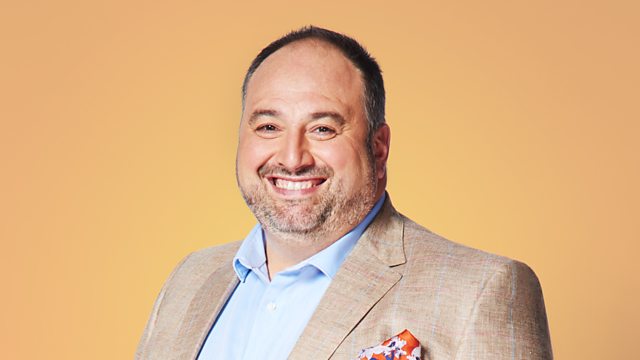 The town’s vicar got an admission from radio and TV star Wynne Evans that he’s never heard of the Ladies of Llangollen.

It came as Father Lee Taylor was being interviewed earlier today by the man best known as Gio Compario in the TV adverts for the afternoon show he hosts on BBC Radio Wales.

Father Lee was on air to talk about the special service he is holding at St Collen’s this Saturday afternoon at 4pm celebrating LGBT History Month.

But Wynne also took the opportunity to ask him about his earlier claim to fame for blessing beer in pubs, his keen interest in old time music hall and how he likes to inject humour into church services.

The host said he and Father Lee had a few things in common in that both had lived in Croydon, south London and both liked beer.

Father Lee explained that when he lived in Croydon before moving to Llangollen he was invited by the landlord of a local pub to bless the beer, which he did, rounding off the occasion with a “good sing” and a drink.

Asked to explain about Saturday’s service, he said: “This month is LGBT History Month during which the lives of notable LGBT people, both past and present, are being celebrated.

“In Llangollen we had two ladies who found love and joy in each other, Sarah Ponsonby and Eleanor Butler.

“So it’s going to be a great service of celebration, celebrating diversity and we’ll be blessing the tomb of the Ladies of Llangollen because they are buried in our churchyard. And after the service we’ll be having celebratory bubbles.”

Wynn told him: “That’s fantastic. Now, I’ve spent a lot of time in Llangollen and I’ve never heard of the Ladies of Llangollen.”

Father Lee explained: “They were two upper class Irish women who came to Llangollen to start a new life together and people would visit them from all over.”

Father Lee replied: “Well, what is clear from their writings and from the books is that they were in a romantic relationship, so they were clearly in love together. They were committed to each other ... whether it was sexual who knows, who cares?

“But we do know they were in love with each other and that’s what we are going to celebrate on Saturday.”

He went on to explain that the ladies were visited by army officers, poets, artists and royalty, with Wordsworth describing them in one of his sonnets and Swansea Pottery making dinner services featuring them.

Asked about his life before he became a vicar, Father Lee said he had worked in pubs and a call centre but had known from the age of 12 that becoming a priest is what he wanted to do.

However, he explained that it had been a long journey and he hadn’t been ordained until he was 35.

Wynne then asked him to explain his love of music hall and he said: “It’s just a fantastic genre which lasted from about 1880 to around 1920 after which came Variety with all the old comedians like Ken Dodd and Max Miller and I just love their humour.”

“Can you merge your work in the Church and music hall? asked Wynne.

Father Lee replied: “A lot of people think the Church has a sense of humour failure but in the Bible Jesus uses comedy and satire. I do humour in church, sometimes in sermons ... the essence of Christianity is joy.”

As the theme of the programme was collections, Wynne asked his guest if he was a collector.
And he replied: “I do collect old music hall song sheets from charity shops and antique shops. I like unusual and funny songs which I like to incorporate in my act.

“We recently formed the Collen Players, a variety show in Llangollen, and we’re doing a show on Friday.

“Tickets are available and the show starts at 6.30pm. I’ll be doing some funny songs and stand-up comedy.”

Rounding off the interview, Wynne said: “So you’ve got a show on Friday and a service on Saturday. Llangollen sounds like the place to be this Saturday.”

* Listen to the full interview on https://www.bbc.co.uk/programmes/m000fdnf
Posted by llanblogger at 3:40 PM